Wildlife crime – the need for a global solution:

Wildlife crime, and particularly illegal wildlife trade, is big business. This multi-billion dollar industry increasingly involves organised crime groups, who see wildlife as a low risk – high value commodity and are systematically destroying the world’s natural heritage. The future survival of many species is at stake – from the more charismatic elephants, rhinos, tigers and pangolins to the less recognised but countless reptiles, amphibians and fish.

Every year literally millions of wild animals are brutally shot, trapped, poisoned and mutilated, or kept in appalling conditions and traded by criminal networks often relying on connections to political, military, border point and other facilitating networks  to get their ‘product’ from source to market. Wildlife crime is organized crime. 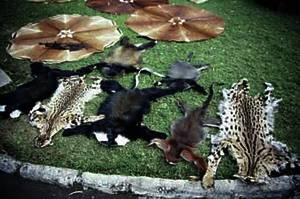 Elephant and rhino poaching have reached crisis point. Between 2010-2012, more than 100,000 African elephants are thought to have been slaughtered by poachers for their tusks, and this trend has continued since with more than  20,000 losing their lives every year. Africa’s elephant population was estimated to be around 415,000 in 2016, with savannah elephants having declined by around 30% over the previous 7 years. The smaller forest elephants are believed to have declined by over 60% between 2002-2011. Some countries have been particularly badly hit – the recent Great Elephant Census estimated that Tanzania’s elephant population had declined by 60% over 5 years since 2010.  In 2007, South Africa lost 13 rhino to poaching; since then at least 7,000  rhinos have been brutally slaughtered for their horns in South Africa, with more losing their lives in Namibia, Zimbabwe and elsewhere. Big cats are suffering too – in spite of international commitments to restore tiger populations, less than 4,000 wild tigers cling to survival, and wild lion numbers have reduced to perhaps just 20,000 in scattered populations across the African continent. The pangolin, also known as the scaly anteater, is the most heavily illegally-traded mammal in the world for its scales and meat in Asia, and all eight species (four in Africa and four in Asia) are threatened with extinction.

“High profit margins, low risk of detection, low rates of conviction, low-level penalties and official collusion and corruption mean that wildlife crime continues to be an attractive prospect for poachers and the criminal networks behind them” explains Born Free Foundation President Will Travers. “Wildlife crime is becoming increasingly sophisticated - criminals are using complex technology and weaponry, non-traditional trade routes and increasing levels of violence. Creative accounting methods, shell companies and tax havens are being used to hide the financial profits of this disgusting trade. In addition, rebel militias are using profits from the illegal wildlife trade as a way of funding their campaigns of insecurity. No one country or organisation can hope to address this crisis alone. We must all act urgently, strategically, and together”.

Tackling the illegal trade, estimated to be worth as much as US$20 billion a year (excluding the trafficking of timber and fish), requires  a concerted international response. The Born Free Foundation and its affiliates have, for many years, been exposing the impacts of wildlife trafficking; two reports commissioned by Born free USA in 2014, Ivory's Curse: The Militarization and Professionalization of Poaching in Africa and Out of Africa: Mapping the Global Trade in Illicit Elephant Ivory, brought the involvement of organised crime and the international nature of the illegal ivory trade to the world’s attention.

In 2015, The Born Free Foundation launched a report entitled “End Wildlife Trafficking” in a high profile event at the European Parliament, which has been instrumental in the development of the EU’s Action Plan Against Wildlife Trafficking. Using the evidence these and other studies generate, Born Free works with politicians and decision-makers through international forums including the Convention on International Trade in Endangered Species (CITES), the European Union, and national governments and enforcement agencies around the world, including here in the UK, to ensure they recognise the threat and take robust action to stamp it out.

There are signs the international community is starting to sit up and take notice. The UN General Assembly has classed wildlife crime as a ‘serious and organised’ criminal activity and called for stiffer penalties for the criminals. Philanthropic individuals and organisations, including the Clinton Global Initiative and the Paul G Allen Foundation (set up by the co-founder of Microsoft), have identified wildlife crime as a priority issue. A summit on Illegal Wildlife Trade held in London in February 2014, hosted by Princes Charles and William and the then Foreign Secretary William Hague, led to a Declaration to tackle illegal wildlife trade which was agreed and signed by more than 40 countries, and has been followed by similar high-level meetings in Botswana (2015) and Vietnam (2016). A further meeting is scheduled for October 2018 in London. Other international meetings and initiatives are attracting an increasingly high level of political interest and commitment. The global community has also recognised the need for all ivory markets across the world to close. The USA and China have acted by banning ivory, alongside a number of other countries. The EU and UK are considering further action.

But there is much more to be done. Signatories to the London summit and subsequent declarations need to demonstrate progress towards fulfilling the commitments they made, and more countries need to be persuaded to make and enact similar commitments. Born Free will continue to work with governments, agencies and our partner organisations to secure progress.