Late last March, in partnership with the Kenya Wildlife Service, Born Free conducted a second animal ground census to establish the number of carnivore and herbivore species during the dry season in Meru Park. We had undertaken the pioneer ground count in September 2016.

To conserve and manage wildlife, we need reliable information on their populations and the dynamics of the species. Such data shows us the species distribution, population densities and species abundance and which can also help researchers and park managers mitigate the decline of biodiversity and document extinction rates where necessary.

Ground censuses should ideally be done twice a year during the dry and wet seasons to compare the dynamics. For Meru, each ground count was carried out for two days by dividing the area into ten blocks and then assigning a team of observers to each block. We set out early in the morning and identified all species sighted, recorded numbers, aged and sexed where possible.

For many years, aerial censuses have been conducted in Meru every three years and no ground counts.  Aerial censuses are appropriate for large mammals. However, they do not do justice for the small and medium sized animals which are a key component of any ecosystem as they are the prey for predators.

Conducting censuses – both aerial and ground – in Meru is crucial given its history. In the 60s and 70s, the Park and adjacent conservation areas had a rich variety of wildlife. However, in the 80s, anarchy befell the area after an invasion by well-armed bandits who poached wildlife and killed the local community. Massive populations of wildlife were decimated. Consequently, infrastructure collapsed and tourism revenues dried up.

In the early 2000, a rehabilitation programme was initiated and which involved restocking of wildlife among other aspects of park management. To date, the species relocated were elephants, rhino, reticulated giraffe, lion, leopard, grevy and common zebra, impala, bohor reedbuck amongst others. Thus, it is crucial to assess the performance of these reintroduced species. Ground counts provide more accurate data and at less cost comparable to aerial census.

Whilst the results for the recent census are yet to be released by KWS, the previous count recorded a total of 37 species drawn from 12 families of mammals and 4 families of common game birds. Among the preferred prey species for lions, buffalo were the most abundant followed by common zebra and common waterbuck. 85% of all wildlife recorded were adults and gender parity for most species was almost equal.

In addition, the count showed that the numbers of wildlife species in direct competition for resources with the endangered rhinos in the sanctuary is high, thus there is urgency to address the situation.

Essentially, the count demonstrated the importance of Meru as a key wildlife habitat as shown by its richness in species diversity and abundance. 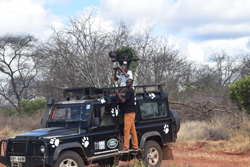