Many species of animals are in precipitous decline across the globe. In most cases, these species are shared by multiple countries. Wild animals don’t respect international borders, and collaboration between countries and their governments is clearly essential in order to ensure that threatened animals are protected throughout their range.

Facilitating international collaboration to enhance the conservation of wild animals that span borders is what the UN Convention on the Conservation of Migratory Species of Wild Animals (CMS) is all about, and the Convention has a 33-year track record, particularly in the protection of birds and marine mammals that migrate over long distances. Over the past week, at the 12th Conference of the Parties to CMS being held in Manila, governments have extended the reach of the Convention to include several iconic terrestrial mammals, including lions, leopards, giraffes and chimpanzees.

This is an important and much-welcomed move because a listing under CMS means governments will now be able to work together to help secure the future of these species. Associate Director Mark Jones, a member of Born Free’s team at the conference, noted: “CMS has taken the bold step this past week to bring some key mammal species under its wing. 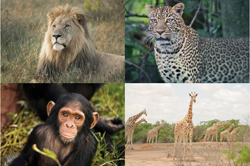 While we don’t usually think of big cats or great apes as being migratory in the traditional sense, these animals frequently cross from one country to another in search of food, mates, or new territory. Lions, leopards, chimpanzees and giraffes are all in serious decline across much of their range, and collaboration between the countries they call home is absolutely essential. We applaud the governments involved for taking this bold step.”

In addition to these four species, the Convention also agreed to bring the Gobi bear, Caspian seal, African wild ass, Przewalski’s horse, and three species of North American bats under its protection. Proposals to add 16 species of bird, including beleaguered African and Asian vultures, and 6 species of sharks including the whale shark, the world’s largest fish, were also adopted. A number of supporting measures aimed at facilitating the actions that will be needed to better protect these and the species already in the Convention’s remit were agreed.

Gabriel Fava, who was also on the Born Free team, added: “Now the hard work of creating new and invigorating conservation strategies must begin in earnest, if we are to reverse the declines and secure a future for these precious animals.”

Born Free has been at the forefront of efforts to extend the reach of CMS to lions, leopards, chimpanzees and other species, and will continue to work with governments and other stakeholders to improve the conservation of wild animals through national, regional and international initiatives.