COMMUNITIES KEY IN SUCCESS OF WILDLIFE CONSERVATION IN KENYA

Wildlife conservation in Kenya, as is likely the case in many other countries, is a political kiln and minefield. The sector is rich in resources – both land and biodiversity – and given that they are not isolated from people, the sector is quite emotive and can be explosive. Due to this, it can be most satisfying or utterly frustrating.  One assured thing is that it is never boring!

Our two main projects in Kenya are located in Meru National Park and the Amboseli ecosystem. Managing both projects have their own unique opportunities and challenges.

Our partnership with KWS has been sealed through a five-year Memorandum of Understanding for Meru National Park (2015-2019) and we have fostered a good working relationship with the KWS team on the ground.

However, in the past two or three years, KWS has had two director-generals and one who is currently in acting position. The turnover at the helm and the structure of the organisation (including the Board) in many instances negatively impacts aspects such as decision-making.  In some cases, the staff have low morale and lack confidence, hence prolonging decision-making process at their levels which impedes some of our project activities. 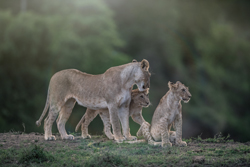 Our Heritage Project involves lion conservation and management where we track and study lions in the Park. So far, we have conducted one carnivore census and have GPS-collared four lions for monitoring purposes. We also regularly remove snares from the western boundary of the Park to reduce indiscriminate poaching of wildlife. In addition to outreach and awareness efforts to schools and communities neighbouring the Park, we are also supporting Kanjoo School in infrastructure development and providing resource materials. Today, enrolment in the school is on the rise.

Despite having our hopes to undertake a major rhino project in Meru dashed, we remain cautiously optimistic of undertaking a joint project with KWS and the community for the protection of the species in the Park.

One emerging challenge in Meru is that the current five-year Management Plan for the Park will expire in 2018.  Unfortunately, not much has been implemented and achieved due to lack of funds. Born Free will assist and be involved in the review and revision of the Plan next year.

Our project in the Amboseli ecosystem is unique in that 90 per cent of the land is owned by the community. Amboseli National Park which is managed by KWS cannot survive without the contiguous area where most of the wildlife lives. Amboseli’s major threat is human activities such as incompatible land-use practices and fragmentation for agriculture and human settlement. Parts of the community group ranches have been and continue to be subdivided and sold off as individual holdings to any interested party. Subsequently, human-wildlife conflict incidences escalate leading to loss of property, human and wildlife.

Climate change has become a painful reality in Amboseli. Today, the ecosystem is hit by prolonged and unpredictable droughts. The drought cycles have become shorter, more frequent and severe such as that experienced this year and in 2011/12 and 2008/9. These have devastating impact on the wildlife like elephants and lions as well as the livelihoods of the community.

Due to the effect of drought on the livelihood of the Maasai community, there has been slow uptake of the predator-proof bomas in the last two years due to lack of funds. As part of our agreement with the community and to ensure ownership of the project, they chip in 25 per cent of the total costs of building the bomas while the balance is taken up by Born Free. This project has had almost 100 per cent success rate except for a few cases where maintenance was a challenge. The success rate is also boosted by the acceptance and ownership of this project by the community.

In addition to fewer bomas being constructed, maintenance and replacement of the old wooden posts with more durable plastic posts has been a challenge for the community. When we established the PPB project, we used wooden posts but with time these couldn’t withstand the termites and we have had to replace them with plastic posts. And posts take up a sizeable portion of the budget.

With regards to the outreach and awareness aspects of the project in Amboseli, we have also seen an increase in enrolment of pupils and students in Ol Moti Primary and Lenkisem Secondary Schools. There has also been notable transition of students from Lenkisem to technical colleges.

On the downside, retaliatory attacks on wildlife by the communities which may directly or indirectly affect our work and also attract negative publicity have occurred. For example, the relations between the community living on the eastern border of Meru Park and KWS can have a negative impact on our project such as retaliatory attacks on lions and other wildlife which may stray out of the protected area.  In the past we have also witnessed similar retaliation on wildlife by the Maasai community in the Amboseli ecosystem.

Also, at times there tends to be unhealthy competition, duplication of projects and territoriality amongst the NGOs in the sector as opposed to cohesion and embracing synergy for a mutual cause.

As a rhino scientist with vast hands-on experience, I have seen the negative effect of rhino horn trade on the species populations.  I also know the effort, passion and sacrifice that rangers and those mandated to protect them have made for the sake of rhinos.

I have been charged by rhinos numerous times that I somewhat became immune.  But one of my most memorable and scariest moment in the wild was when we were moving rhinos from Solio Ranch to Ol Pejeta Ranch in 1993. We had spent the whole day searching for black rhinos and eventually found one at about 4.00 p.m. We hid behind an abandoned termite mound about 10 metres away as we prepared to dart it. We were aware that there were lions mating within earshot. But little did we know that there was a spitting cobra seeking refuge in the termite mound. Suffice it to say that despite the near-paralysis in some of us and almost flight-mode in others, the cobra decided to slither away without much of a glance in our direction. We then darted and moved the rhino without further drama.

In essence, wildlife management and conservation is more of managing the people than the wildlife. If we can get it right with the people, then managing and protecting the wildlife becomes an easier task. That is why Born Free Kenya partners with both the custodian of wildlife in Kenya – Kenya Wildlife Service – and the local communities. All national parks and reserves are surrounded by communities and gaining their trust, support and ownership is key in the success of wildlife management and conservation in Kenya.