COULD VANCOUVER AQUARIUM END ITS KEEPING OF WHALES AND DOLPHINS?

As the citizens of Vancouver look set to consider the future display of whales, dolphins and porpoises (collectively known as cetaceans) at the famous Aquarium, the Park Board has been discussing a motion not to import more cetaceans until a deciding vote. 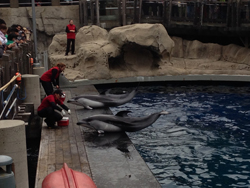