Following the tragic death of zoo keeper Rosa King by a tiger at Hamerton Zoo Park, Cambridgeshire, on 29th May, international wildlife charity, Born Free, is calling for a re-evaluation of the zoo licensing and inspection process in the UK, including the establishment of a full-time, independent and centralised zoo inspectorate.

The circumstances of Rosa’s death are currently unclear and Born Free’s thoughts are with Rosa’s family, friends and colleagues. The tragic news is hauntingly reminiscent of the death of a keeper at South Lakes Safari Zoo four years ago, and further highlights not only the dangers involved with keeping wild animals in captivity, but possible deficiencies in the current zoo licensing regime.

Recent media reports, assisted by Born Free, reveal a shocking list of incidents involving significant animal welfare and human safety concerns in zoos across the UK, including gates to large animal enclosures kept shut with stones, a peacock put in isolation because of a bird flu outbreak that died of starvation, and a caiman that died after being left outside during the winter.

Chris Draper, Associate Director for Animal Welfare & Care at Born Free, said: “This is just a snapshot of the zoo industry: our knowledge is that similar problems are widespread and under-reported. We need a robust system of licensing and inspection of zoos - as a minimum - to try to prevent such appalling incidents from occurring in the future.”

Currently, part-time Government-appointed inspectors may visit a zoo every three or four years. They report their observations to the Local Authority which is responsible for issuing zoo operating licences and it is up to that authority to ensure that the zoo acts on any requirements (known as Conditions) and recommendations made by the inspectors.

Born Free is concerned that Local Authorities vary widely in their understanding and application of the relevant zoo legislation, and that effective sanctions for non-compliance with the criteria relating to animal welfare, conservation and public safety under the Zoo Licensing Act appear to be limited and infrequently applied.

Born Free believes the only way of introducing consistency and rigor into the process is to review the current process in the UK and consider a number of changes.

Draper added: “This situation is, frankly, unacceptable and change is long overdue. The zoo industry would have us believe that the solution lies in increased self-regulation. It is abundantly clear that this would be inappropriate, and Born Free is calling for an urgent re-evaluation of the zoo licensing and inspection process in the UK, including the establishment of a full-time, truly independent zoo inspectorate to undertake more frequent inspections.”

Will Travers OBE, President and Co-Founder of Born Free, added: “The situation at South Lakes Safari Zoo seems to sum up what is wrong with zoos and the laws governing them in the UK today: not only were there the appalling reports of animal deaths and dreadful conditions at the zoo, but now a slightly-amended management team has received a licence to continue to operate the zoo. It is clear that the problems at the zoo developed - to all intents and purposes unchecked - over a very long period, and yet Barrow Borough Council now consider the undisclosed reassurances it has received from the new management team sufficient to ensure the safety of the animals, staff and visitors. I am deeply concerned and believe that an independent review of the zoo licensing system is urgently needed.”

Born Free’s campaign Beyond the Bars aims to raise awareness of the plight of captive wild animals worldwide. The campaign aims to expose animal suffering and neglect, recommend improvements in captive animal welfare and the enforcement of legislation, and to call for the closure of substandard zoos. 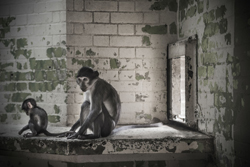