The Born Free Foundation is urging the European Commission to take bold action and shut down the ivory trade across the European Union.

More than 20,000 African Elephants are being slaughtered each year by poachers, to supply ivory into illegal markets in the Far East and across the globe. Africa’s elephant populations have plummeted from maybe 5 million a century ago, to less than half a million today.

While international trade in ‘new ivory’ has been banned for almost 30 years, domestic markets continue to thrive, and international trade in older items continues to be permitted. EU Member States are the largest exporters of such legal ivory products. A total of 2242 elephant tusks and more than 44,500 ivory products were legally exported from Member States between 2006-2015, with China and Hong Kong as major destinations.

The presence of this large legal trade in ivory products to, within and from the EU stimulates global demand and provides poachers and traffickers with a mechanism by which illegal ivory from recently killed elephants can be laundered into trade. 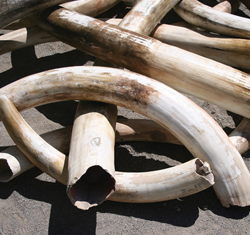 “We firmly believe that there is no way to prevent newly poached ivory from entering world markets when any legal ivory market exists. That’s why action by the European Commission is so important. The current EU rules are weak, complex and impossible to enforce. It’s time for Europe to recognise that elephants are worth far more alive, follow the example set by African countries, the United States and China, and ban the trade in ivory into, within and from EU Member States without delay, and with minimal exemptions.”

The European Commission’s public consultation on ivory trade, to which Born Free has provided a robust and detailed submission, closed on 8th December 2017.

The Westminster government is also consulting on plans to close down ivory markets in the UK. The consultation finishes on 29th December 2017. Born Free is urging its supporters to engage with the consultation. To find out how to make your voice heard, go to www.bornfree.org.uk/get-involved/campaigning/uk-ivory-trade/