UPDATE ON THE LIONS OF DINDER-ALATASH

Last year, an expedition jointly organised by Born Free and WildCRU*, led by Dutch lion biologist Dr. Hans Bauer, ‘discovered’ a lion population in a huge area that stretches either side of the border between Sudan and Ethiopia, encompassing two National parks – Dinder on the Sudan side, and Alatash on the Ethiopian side.

The lions across this area have long been protected by authorities and local communities; they simply went unnoticed by the international community because the area is remote and hardly ever visited.

This year, with further support from the Born Free Foundation, Hans went back with new local partners to conduct a more wide ranging study, and returned with more surprises. As Hans himself says, “we thought we knew all the remaining intact Sudan savannahs, but here was a hidden biodiversity treasure island”.

Dr Ameer Awad of the Sudan Wildlife Research Centre, who accompanied Hans on his expedition to Dinder National Park and helped write the report, commented: “We have been doing studies for a long time, but due to lack of international collaboration most of the work remains unpublished and inaccessible; hopefully this report will contribute to better information sharing”. 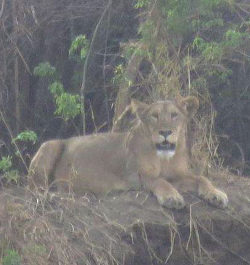 The team used extensive camera trapping but didn’t get enough observations to calculate lion density. However, the discoveries they made gave them a much better idea of the diversity of species living in the region, leading to updated species lists for the ecosystem. The team observed Heuglin’s gazelles, a species that is rarely seen elsewhere and could now be endemic to Dinder National Park. And while the leopard is considered extinct in Dinder, camera traps filmed two of them on the Ethiopian side.

During the study, the team observed large numbers of reedbuck around water sources in Dinder. Hans slept on a stretcher under a tree with only a mosquito net for protection, to be told by the guards that his bed had been surrounded on one occasion by a small herd of buffalo. Based on estimates of abundance of these and other potential prey animals such as waterbuck, the team estimated that the system might support around 200 lions belonging to the endangered northern subspecies.

Further studies and surveys are needed to get a more accurate picture of the lions in the region, and the team is already planning to use a different census method next year in order to try to estimate the lion population more accurately. Further surveys also need to be conducted to investigate the status of other species, including Tora hartebeest and Tiang, two species of antelope threatened with extinction, and elephants which are thought to have been extirpated from the area.

In their report, the team stressed the need for transboundary cooperation between Sudan and Ethiopia to boost the viability of prey and lion populations, and facilitate recolonization of species on either side of the border from the side where they still occur; the gazelle from Dinder to Alatash and the leopard from Alatash to Dinder.