FINALLY, A WIN FOR WILD ANIMALS

After decades of campaigning and years of waiting, Born Free welcomes UK Government plans to end the legal import of trophies from hundreds of wild animals, shot for ‘fun’.

“Banning the import of wildlife trophies is an important step towards recalibrating our moral compass.”  - Will Travers OBE

As the UK Government today announces its ban on trophy hunting imports, we're urging Ministers to implement this important and long-awaited legislation without further delay, to ensure the voice of the British people, who called for an end to hunting trophy imports two years ago, is heard, and the lives and dignity of wild animals are protected from this barbaric practice.

The proposals, while delayed, are broadly welcomed by Born Free which, as an organisation which represents widespread public support for a ban, is opposed to the killing of any animal for sport or pleasure, and strongly refutes claims by trophy hunting proponents that their activities significantly support conservation or local communities. 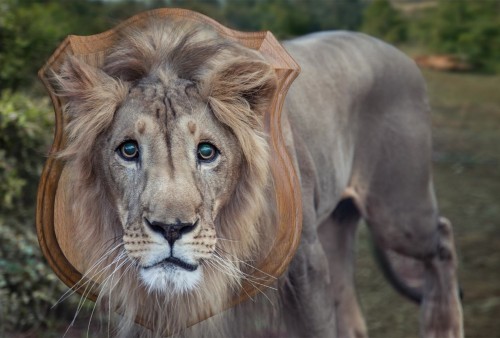 The UK Government pledged to introduce the ban back in 2019, as part of their election manifesto, yet trophies from many species, including those threatened with extinction, continue to be shipped back to the UK.

The ban is initially expected to be tabled in Parliament during the first half of 2022 as part of the Government’s ‘Animals Abroad Bill’ and will cover around 7,000 species. It will apply whether the trophies are derived from wild or captive-bred animals, and there will be no exemptions. Punishments for transgressions will be based on existing wildlife trafficking tariffs and could include up to 5 years imprisonment.

Will Travers, Co-founder and Executive President, Born Free stated “Banning the import of wildlife trophies – the body parts of wild animals shot for ‘fun’ – is an important step towards recalibrating our moral compass. This is primarily a matter of ethics and morality. However, at the same time as taking this principled measure, we must also redouble our efforts not only to invest in and sustain the world’s remaining wildlife areas but also support the transition away from trophy hunting by local communities who, to some degree, may have modestly benefitted from income and jobs derived from a practice which we hope will, one day, be universally consigned to history.”

Dr Mark Jones, Head of Policy, Born Free added, “We have long campaigned for a total ban on the import of hunting trophies on moral and ethical grounds. While the Government’s proposals don’t go quite that far, they do at least acknowledge that in this time of crisis for wildlife and biodiversity, it cannot be right for British hunters to be able to pay to kill endangered wild animals overseas and ship the trophies home. While the UK is by no means the biggest destination for international hunting trophies, nevertheless UK-based hunters frequently travel overseas to kill animals for fun, including species that are threatened with extinction. The proposed ban will send a clear signal that the UK does not condone the brutal killing of threatened wild animals for this so-called ‘sport’ by UK citizens. It is two years since the British public overwhelmingly called for an end to hunting trophy imports, so this announcement is long overdue. We urge the Government to introduce and implement this legislation as quickly as possible.”