It's been 55 days since loggerhead turtles Genoveffa and Gavino were released back to the wild off the coast of Western Sardinia, after many years held in poor conditions at an aquarium. Born Free has been following reports of their progress since release, and it's sounding promising so far. 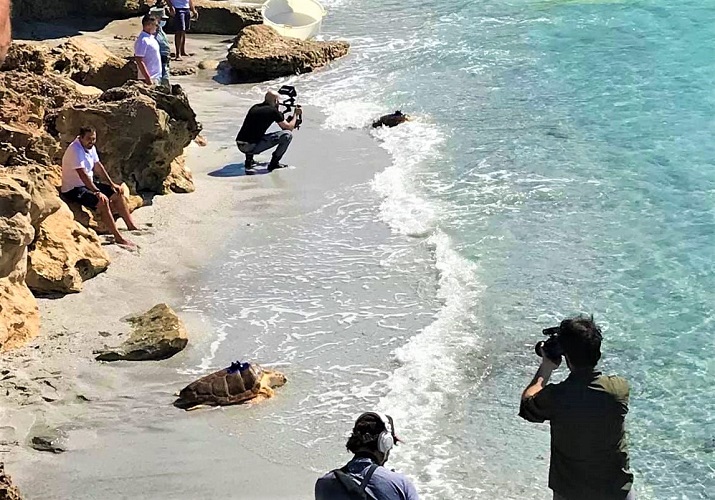 Both turtles were satellite-tagged to enable post-release monitoring via GPS, and allow their movements to be tracked to confirm whether they have been able to locate wild feeding grounds and look after themselves, independent of any human intervention.

Data from their satellite tags has shown that both turtles have travelled hundreds of kilometres since their release. Genoveffa seems to have mainly stayed around the southern coast of Sardinia, swimming over 500 km and down to depths of 60 m. Gavino has been slightly more adventurous and travelled over 850 km, reaching the Balearic Islands in Spain. Genoveffa and Gavino were never held in the same tanks during their many years at the aquarium, and sea turtles are naturally solitary, so the fact that they have gone in different directions is to be expected.

Born Free’s Captivity Campaigns Information Coordinator, Sarah Jefferson said: "After receiving so many Red Flag tourist reports about the terrible conditions in which Genoveffa and Gavino were held at the aquarium, it's fantastic to hear that they appear to have so far adapted well following their release back to the wild, where they belong. It has taken many years to get to this point and we thank the dedicated staff at the CReS rescue centre, and everyone else involved in Genoveffa and Gavino's long rehabilitation and release to freedom."

You can follow Genoveffa and Gavino's progress, and track their movements in the wild via our Turtle Tracker page.