TROPHY HUNTING: A DEATH SENTENCE OR A LIFELINE FOR WILDLIFE CONSERVATION?

The debate took the form of short presentations by the four panellists outlining their different views on trophy hunting, followed by questions from the students which led to a lively and informative discussion.

Alongside Mark on the panel were Sally Case from the David Shepherd Wildlife Foundation, Cathy Dean from Save the Rhino, and Michael ’t Sas-Rolfes, a conservation economist from South Africa.

Mark outlined why Born Free is wholly opposed to the killing of wild animals for sport or pleasure whether they are wild-born or bred in captivity. The lure of profits from the killing has led to the development of an industry wracked by bad science, corruption, greed and vested interest, and some appalling practices such as canned hunting in South Africa. He also explained to the students why claims that trophy hunting supports conservation and local communities don’t hold up, and the damage that trophy hunting is inflicting on the welfare and conservation of many species of wild animals.

The students, who were studying a wide range of subjects, heard differing views from the panellists. Discussion ensued on everything from the ethics of killing for sport, to how conservation across the developing world might be most effectively funded.

While no poll was taken to gauge the mood of the audience, the evening proved to be very interesting and hopefully the students went away with a better understanding of this controversial and divisive issue. 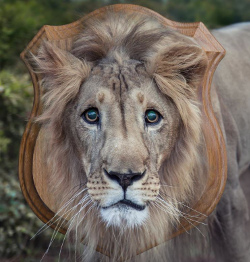