Poaching and wildlife trafficking pose a major threat to elephants, rhinos, pangolins, great apes, and many other endangered species. Although illegal to hunt or capture protected species, two major hurdles stand in the way of effective enforcement of wildlife protection laws: a) failure to arrest and prosecute wildlife poachers and traffickers, and b) widespread corruption.

The EAGLE Network (Eco Activists for Governance and Law Enforcement) fights to overcome these hurdles through a programme of investigations, arrests, prosecutions, and publicity. With these activities in place, EAGLE enables strong deterrents against wildlife crime in ten African countries: Cameroon, the Republic of Congo, Gabon, Guinea, Togo, Benin, Senegal, Uganda, Madagascar, and as of May 2017, Ivory Coast.

EAGLE’s innovative approach had numerous noteworthy achievements in 2017. Altogether, 406 major wildlife criminals as well as 15 corrupt government officials were arrested in 2017, equivalent to more than one trafficker arrested per day. During the operations associated with these arrests, multiple seizures of wildlife parts took place, including 3.4 tonnes of elephant ivory and almost half a tonne of hippo ivory; 8.4 tonnes of pangolin scales; and over 1,300 skins of leopards, cheetah, crocodiles, pythons and monitor lizards. This haul represents almost countless animals slaughtered for the illicit trade, but hearteningly, also seized and were live animals such as 218 grey parrots and 200 birds of other species as well as 118 turtles and tortoises, and 9 crocodiles.

Noteworthy was the capture of Abdourahamane Sidibe, head of one of Africa’s most notorious ape trafficking networks, and responsible for illegally trading more than 130 chimpanzees, gorillas, mandrills, and other wildlife. His arrest was the culmination of a 5 year investigation.

Sidibé had been sentenced in absentia, at the same time as the 2015 sentencing of Ansoumane Doumbouya, the corrupt senior government official formerly responsible for issuing legal permits for trade from Guinea. Many permits fraudulently issued by Doumbouya had been sold to Sidibé, which enabled the illegal export of 130 chimpanzees and other wildlife to China. Thanks to EAGLE’s perseverance, Sidibe was finally arrested at his home in February 2017 after two years on the run, during a quick transit through Guinea.

To date, EAGLE Network’s efforts have led to the arrest and prosecution of over 2,000 major wildlife criminals. Born Free has been supporting EAGLE since its first project was initiated in Cameroon in 2002. Will Travers, Born Free’s President, has known one of EAGLE’s co-founders since that time:

“They said it could not be done, that a Non-Governmental Organisation could not have a significant and lasting impact on the illegal trade in Africa’s wildlife. They were wrong. Initiated by my friend, Ofir Drori, the EAGLE Network is achieving outstanding results – 406 wildlife traffickers arrested, nearly 90% put behind bars, one of Africa’s most notorious ape traffickers – a man responsible for more than 130 chimps, gorillas and other individual animals being illegally traded – finally arrested; thousands of kilos of ivory seized…and much more. And that’s just in 2017. 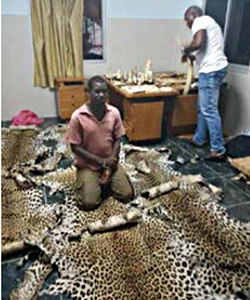