Born Free warmly congratulates Thailand’s law enforcement agencies as well as Freeland Foundation for its critical role in securing the arrest of one of Asia’s most sought after but, until now, untouchable wildlife criminals.

On 19th January Thai police arrested Boonchai Bach for the trafficking of 14 rhino horns between Africa and Thailand in December 2017.  However, this was no isolated incident, and Bach and his family have for over a decade run an international supply chain of trafficked elephant ivory, rhino horn, pangolins, tigers, lions and more between Africa and Asia. Their extensive and well co-ordinated network enabled them to orchestrate the supply of parts of thousands of animals to major dealers in Laos PDR, Vietnam and China.

Boonchai Bach is closely linked to other equally notorious wildlife traffickers such as Chumlong Lemthongtai, currently serving 13 years in a South African jail for his role in supplying Vixay Keosavang, ‘the Pablo Escobar of wildlife trafficking’, with rhino horn for sale in Vietnam and China. Freeland have for many years been working behind the scenes gathering intelligence and working closely with law enforcement agencies to incriminate these ‘kingpins’.

Such blows to transnational criminal networks operating with impunity and decimating the world’s wildlife for profit are very significant. Toppling individuals in key positions of trust within those networks has a dramatic effect on their operations, and is a lifeline for the many individual wild animals being targeted. More arrests are promised by Thai authorities, and we wish them god speed! 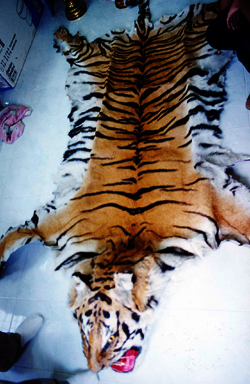