An estimated 58 lions roam and roar in the 870km2 Meru National Park. That is from a census conducted last year by the Kenya Wildlife Service (KWS) and other partners including Born Free Foundation. Sightings of several cubs and sub-adults in the past few months makes us cautiously optimistic for a positive growth on lion populations in the area. Together with the KWS Meru Research staff, Born Free puts in several hours daily to monitor these carnivores.

As the bright red disc of the sun rises over the skies in Meru Park, we meet to map out the areas in search of lions. Our mission today is to monitor at least the three known prides - Mulika, Elsa and Sanctuary. We have three vehicles, each designated toa pride’s home range. As one of the team leaders, I am hopeful that we will find all three prides and maybe more unknown individuals.

Normally, we search for unknown individuals whilst monitoring the known prides, studying the changes in their range, and how elements like lion diseases, prey abundance, pride takeovers and associations andthe influence in their growth. This data and information ultimately helps shape conservation and management of these carnivores.

Unlike the Mara ecosystem, Meru Park is predominantly covered with thick bush and shrubs making lion sightings and monitoring difficult. However, this does not hinder us from attempting to monitor each individual lion.We track them by sight, follow them by vehicles and also respond to phone calls from tour drivers and KWS rangers on patrol. We track their spoors while on foot patrol and also use satellite collars that transmits timely signals revealing detailed information on daily movements and location.  Vultures circling in the skies also indicate a possible lion kill.

As we traverse the Elsa pride home range, heading west to the Sanctuary pride area, we note a tower of reticulated giraffes prominent above the short bushes to the North West all vigilantly facing one direction. We decide to change route and drive towards them. We are forced to go round the bushes before coming to an open Mugwango Plains. And right there six members of the Elsa pride emerge from the thickets not far from the giraffes. They majestically cross the road behind us, ignoring us, and move into the plain towards Mutundu River perhaps to quench their anger with cool water after a failed hunting expedition. Into the thick vegetation cover along the river they vanish giving us no chance to closely monitor them.

In no time, a call from the other team comes through. They have sighted the Mulika Pride. We respond swiftly and in 15 minutes, we come across five members of Mulika resting on the road and in the shade of an acacia tree a few metres from the river they draw their name from. We switch off the engine a few metres away from them and two sub-adults raise their heads, unsuccessfully struggling to open their heavy eyes before the heads roll back to the ground. One adult female rolls on her back giving us a good perspective of her healthy body. Normally, they are eight in total – six females and two males. This time round, they are four females and one sub-adult male.  The pride are full and contented, and ignore our presence to catch some snooze.

Lions spend more time sleeping than any other animal. Lazy? Not exactly. Their hunting success is low and resting is a good way to make each meal last longer- which may be another way of saying that laziness is part of their behaviour profile.

After spending almost two hours with the Mulika pride, we drive off for another 20 km to the west in search of the Sanctuary pride. It is noon, the sun is blazing and the rising humidity slowly saps our energy. But we keep at it. With the help of GPS coordinates, we arrive at the general area of the last transmitted signals. We thoroughly screen the area with binoculars in search of Virginia, the oldest female of the Sanctuary pride and the first lion we collared in Meru.

Her collar is programmed not to transmit signals to the radio receiver after a certain time to prolong battery life.  After searching for her in the thickets and brush, we locate her under a bush with a kill - a waterbuck, one of her favorites. Lions usually hunt at night, either alone or in a group. They can use a number of strategies to catch their prey. Sometimes a pride appears to split up, with some members pursuing the prey into an ambush set by the others. Sanctuary pride is known to use this strategy, they only team up during hunting and split after clearing the kill.

This time Virginia is alone. Despite aging, she is still a fearsome hunter. We quietly watch her as she pulls at and chews on her meal. This time, her body condition is still not very good but it is better than the previous week. Soon, we note that she doesn’t take kindly our intrusion. In a semi-crouched posture, she growls and her tails persistently taps the ground indicating her agitation. Our time is up! She needs time alone, free to feast. When monitoring lions, we conduct prolonged observations in a non-invasive way. As we depart, we come across a herd of waterbucks. They must be the herd missing a member.

For us, every single day is another opportunity to observe, record, think and reflect on how best to help conserve these carnivores. 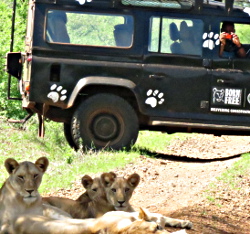 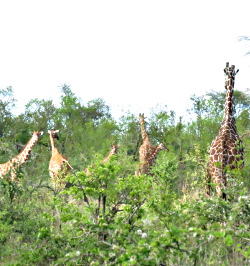