Reports state that a tourist has been mauled by a captive bear during a visit to the Wat Luang Phor Lamai Temple in Phetchabun province, Northern Thailand.

Whilst lowering bowls of rice into the bear enclosure, the Thai man was said to be pulled in by the hungry animal, knocked unconscious, and then mauled as he was dragged across the ground. Thankfully, he was eventually rescued and is said to be recovering in hospital.

Monks are known to keep numerous animals in this Temple grounds. Just a few days before this incident took place, the head Abbot reportedly stated that ‘the creatures were hungry because they were not being given enough food’, appealing for public donations to help.

It is unclear as to whether the tourist had specifically gone to the Temple to give food to the hungry bear or if he had been teasing the animal, as some reports suggest. Whatever the reason, this is a serious incident and Born Free appeals to the Thai authorities to investigate the situation further, both in terms of public safety and the welfare of the animals. 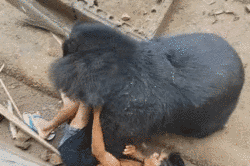