TILIKUM, THE ORCA, IS PRONOUNCED DEAD

Tilikum, the largest orca in captivity and whose life was featured in the blockbuster film, Blackfish, has died.

Reports emerged last year of Tilikum’s deteriorating health due to a drug-resistant bacterial lung infection, but today SeaWorld has confirmed that he has tragically passed away.

Tilikum was captured from the waters off Iceland in 1983, aged just 2 years old. He was been held in captivity for 33 years; spending the last 24 years at SeaWorld Orlando. At almost 7 meters in length and 5,700 kg in weight, he was the largest orca in captivity and he starred in SeaWorld’s headliner show, ‘Shamu’. However it was on 24th February 2010, when Tilikum and his life become headline news, when he killed his trainer, Dawn Brancheau. This tragic story was then featured in the 2013 film documentary, Blackfish, which investigated the possible reasons behind this lethal attack, and previous recorded attacks, concluding that his questionable mental state was one of the consequences of keeping orcas in captivity. Since the global distribution of Blackfish, shares in SeaWorld have tumbled and public opinion has changed; questioning the ethics of keeping these intelligent marine mammals in captivity.

Since Blackfish, Tilikum has been housed in a small tank, alone, and was no longer used in the public performances. A desperate existence for such a magnificent animal.

The Born Free Foundation is saddened, but not surprised by the news today. The diagnosis some months ago of a terminal illness, meant that it was only a matter of time before his death.

“The sad fact is that there are still over 50 orcas in captivity, kept in equally cramp conditions, around the world,” said Samantha Goddard at Born Free, “Our work will continue to highlight their individual plight and call on governments and the captive animal industry to phase out the keeping of orcas, and other species of cetaceans, in captivity and ensure instead that we protect these beautiful creatures in the oceans, where they belong.”

Help us protect these beautiful creatures in the wild by adopting an orca today. 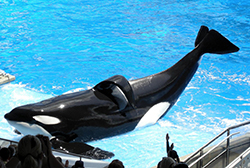