BORN FREE REACTS TO KILLING OF TIGRESS IN INDIA

Born Free is saddened to learn of the death of tigress Avni (or T-1) who was killed as a result of her reported attacks on people in the forests of Yavatmal, India.

Born Free encourages Compassionate Conservation and works with the local communities who live alongside wildlife to foster co-existence. Born Free supports the work of the Satpuda Landscape Tiger Partnership which brings together seven NGOs in central India to protect the nation’s tigers and their habitat by engaging with local communities.

Born Free also provides lifetime care to Gopal the tiger at its sanctuary in southern India. Gopal was captured by authorities after coming into conflict with people when he was found preying on their cattle.

Professor Claudio Sillero, Born Free’s Chief Scientist, said: “Tigers and people live close to each other in central India; this brings about conflict and the need for compromise. Fostering co-existence with large cats requires long-term engagement between government officers, conservationists and local people to minimise impacts on human lives and livelihoods. We await a full account of what happened in Yavatmal, but clearly the shooting of Avni by a sport hunter is a regrettable event, seemingly aimed more at appeasing the media than dealing with a problem animal in a more humane manner.” 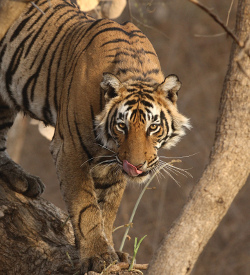