A company called ‘Golden Tiger Co. Ltd’ has been granted a provisional licence to build and operate a ‘zoo’, which apparently plans to hold hundreds of tigers. We understand that there may also be plans for this zoo to use tigers as ‘props’ for souvenir tourist photographs and visitor interaction activities.

It is believed that ‘Golden Tiger Co. Ltd’ is the new name for ‘Tiger Temple Co. Ltd’, which had strong connections with the notorious, now closed, ‘Tiger Temple’ facility. Over the years, Born Free received many complaints from visitors to Tiger Temple, expressing their concerns for the welfare of the tigers, many of which were held in poor conditions or used for tourist photographs. In June 2016, the Department of National Parks finally removed all 137 tigers from Tiger Temple, resulting in its closure. It is therefore extremely disappointing that a new captive tiger facility is now being constructed by ‘Golden Tiger Co. Ltd’ with reported plans to exploit tigers as a money-making venture. Several photographs of the new ‘Golden Tiger’ facility have recently been circulated online, which show the numerous tiger cages that have been built so far. These cages appear to be very small, cramped and barren.

Born Free has expressed our deepest concern about the ‘Golden Tiger’ plans with the Thai Department of National Parks, and the Thai Tourism authorities, urging that this zoo is not given authorisation to open.  We have also called on ABTA, the British Travel Association, to raise their concerns about this new facility, which is unlikely to meet with the standards laid out in their ‘Global Welfare Guidance for Animals in Tourism’, in which the use of wild animals as ‘props’ for souvenir tourist photographs and the keeping of animals in restrictive spaces that prevents natural behaviour, are deemed as ‘unacceptable practices’.

Born Free urges the Thai authorities to consider the welfare of the tigers involved, as well as Thailand’s international reputation. 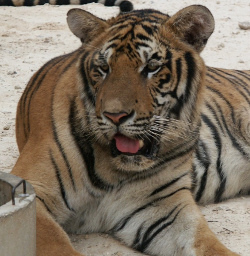