THE BEGINNING OF THE END FOR TIGER FARMING?

With less than 4,000 tigers remaining globally, facing a myriad of threats in their forest homes, wild tigers need no added pressure. Sadly they face a little known but formidable threat, one which may yet spell their end in the wild: their captive breeding in large commercial enterprises in the infamous tiger ‘farms’ of China and Southeast Asia.

Tiger skins, bones, claws, teeth, whiskers, fat - you name it, there's a market for it.  A market which feeds off the tiger breeding business, a business which in turn stimulates the market for tiger parts and products, both from captive sources and from the wild.

In 2007 the 14th Conference of the Parties (CoP) to the Convention on International Trade in Endangered Species (CITES) determined that 'tigers should not be bred for trade' and that tiger farms should be phased out. Since then, the need for implementation of this measure has been studiously ignored and the measure itself has been attacked at successive CITES meetings. Nine years later, the number of captive tiger facilities and the number of captive tigers is at an all time high, with between 7,000 and 8,000 tigers in just four countries: China with the lion’s share, Thailand, Lao PDR and Vietnam.

The market is alive and well, supply and demand locked in a grisly embrace, while wild tiger killing continues. A report issued this week highlighted that the most commonly traded tiger commodity was their skins, causing many to recall a Chinese government regulation which legalises certain trade in skins from captive bred tigers. So far in 2016, the number of wild tiger deaths has reached 98 tigers, up from 91 for the whole of 2015*.

Currently, the 17th CoP is taking place in  Johannesburg in South Africa, and again, China attempted to remove the tiger farming measure, but India, Nepal, USA, the European Union and even Lao PDR spoke out against this proposal. China stood alone, and when pressed, retracted its proposal.

In its statement during the discussion, the Lao PDR delegate took the unprecedented step of admitting it had three facilities housing approximately 700 tigers which were known to be trading tiger products to international buyers, and confirmed a Ministerial statement made the previous week which committed to closing facilities which were intensively breeding tigers.

Lao PDR is the first of the tiger-farming countries to publicly declare their intention to abide by the CITES measure. It is hoped Lao PDR will follow through, and that others will follow suite. 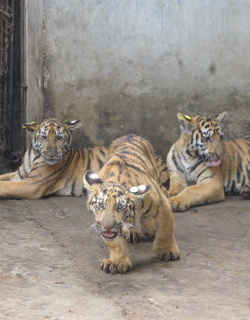