Born Free has cautiously welcomed the news that leading holiday operator Thomas Cook is to stop selling tickets to facilities keeping orca in captivity. This includes the controversial SeaWorld parks and Loro Parque in Tenerife.

Sustained efforts to inform the travel industry over many years by Born Free, Peta and others have undoubtedly influenced a decision which Thomas Cook states is based on a review of the scientific evidence.

Born Free is convinced that the complex needs of whales, dolphins and porpoises (cetaceans) cannot be met in captivity, and calls for an end to the keeping of these animals in dolphinariums.

The charity believes this decision is symptomatic of a rapidly growing shift in public attitudes away from the exploitation of wild animals in captivity.

“The captive exploitation of marine mammals, elephants for riding, lion and tiger cubs for petting, and primates and other species for photographic props is falling from favour, particularly in European and North American markets and Thomas Cook’s decision accurately reflects the public mood,” said Born Free CEO, Howard Jones. 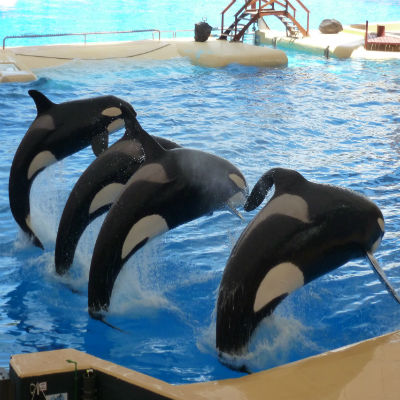 Dr Chris Draper, Head of Animal Welfare and Captivity at Born Free, added: “The physical, sensory and social environment in which cetaceans live in the wild contrasts dramatically with the restricted and barren tanks found in dolphinariums where cetaceans are kept purely for human ‘entertainment’. It is our hope that Thomas Cook’s lead will cause others in the travel industry to abandon promoting visits to dolphinariums, and that this will mark the beginning of the end for the captive cetacean industry once and for all.

“On a cautionary note, the announcement by Thomas Cook appears to apply only to facilities keeping orca: it remains to be seen whether they or other travel agents respond to the risk of suffering endured by other cetaceans such as dolphins and beluga kept in captivity and take appropriate action. Furthermore, it is imperative that we investigate the keeping of cetaceans for entertainment purposes across the globe to ensure that Thomas Cook’s decision does not simply shift the problem from North America and Europe to emerging markets for captive cetaceans in the Middle East, Asia and the Far East."

Draper continued: “While there is a long way to go, I hope we will soon welcome an era where the global travel industry starts to work with Born Free and other welfare and conservation NGOs, to promote the protection and long-term future of cetacean in the wild where they belong.”

In 2016, Guo Guangchang, one of China’s wealthiest businessmen and his company Fosun, together with Thomas Cook, launched a joint venture – Thomas Cook China, to provide travel services to affluent Chinese tourists. Fosun owns 51% of the new company. Within the last two weeks, Thomas Cook China announced a strategic partnership with the government of Hainan Provence, China, to promote tourism to the city of Sanya on Hainan Island, where the recently-opened $1.74 billion Atlantis Sanya, owned by Fosun and managed by Kerzner International, features captive bottle-nose dolphins, belugas and sharks.

Born Free favours moving investment away from captive exploitation towards real, compassionate conservation in the wild.

Born Free notes that while Thomas Cook, the best-known travel brand in the UK, is moving away from captive wild animal exploitation, Bear Grylls in partnership with Sea Life, is opening a new ‘Dive With Sharks’ experience at the Birmingham NEC with the opportunity to create more such ‘attractions’ should this prove to be popular. Born Free urges the public to vote with their feet, to stay away and send a clear signal to Grylls, Sea Life (and its owners Merlin Entertainment) and the City of Birmingham that enough is enough.

Loro Parque has stated that they received a clean bill of health from a facilities auditing company called Global Spirit, asserting that Global Sprit was ‘linked to The Born Free Foundation’. For the record, Born Free is not linked to Global Spirit and maintains its historic and principled opposition to the exploitation of captive wildlife. Born Free helped return three of the last captive bottle-nose dolphins from the UK to the wild in 1992 (there have been no captive dolphins in the UK since 1993) and, more recently, undertook the rescue, rehabilitation and release of two bottle-nose dolphins from captivity in Turkey to freedom in 2012.