Tallinn, the capital of Estonia, has declared that public event permits to circuses that use wild animals will no longer be issued. This follows similar decisions in recent months by the Estonian cities of Tartu and Pärnu.

The Estonian Ministry of Rural Affairs is currently working on a draft bill to end the use of all wild animals in circuses throughout Estonia. Provided the bill is approved by the Estonian Parliament, it is likely to come into force by 1st June 2018.

The Estonian Veterinary Association is fully supportive of the ban. In June this year, ENDCAP, the European coalition founded by Born Free, had welcomed the announcement by the President of the Association, Priit Koppel: “The Estonian Veterinary Association has voted for banning the use of wild animals in traveling circuses, thus we support the stances of the members of ENDCAP, the European leading network of animal organizations and live nature experts, who recommend that all European countries should ban the use of wild animals in traveling circuses." 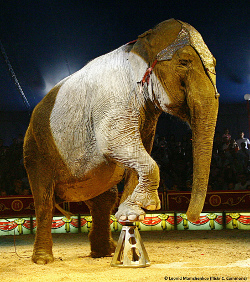