CEO, Bo Kjellson stated that the cubs were ‘surplus’ and could not be moved or sold to other zoos. Mr. Kjellson referred to this decision as a ‘natural path’ to take ‘when animals born at the zoo do not fit into the group  or are not needed.’ Sadly, this was the fate of four cubs born in 2012, and another three cubs born in 2014. In 2016, another four cubs were born, two of which were killed and the other two were moved to a zoo in the UK.

Borås Djurpark is a member of the European Association of Zoos and Aquariums (EAZA), which claims on its website that “modern and well-managed zoos select the species which they keep very carefully and for specific reasons”. Despite such claims, the culling of healthy animals is believed to occur relatively frequently in zoos, including EAZA members. For example, Odense Zoo in Denmark reportedly killed their surplus lions in 2014 and in 2015 to dissect in front of a crowd of visitors. The dissection in 2014 took place just weeks before the infamous case of Marius the giraffe, who met a similar fate at Copenhagen Zoo.

‘For more than 30 years, the Born Free Foundation has maintained that wild animals pay way too high a price in captivity to justify the existence of zoos’ said Born Free’s Head of Animal Welfare and Captivity, Chris Draper. 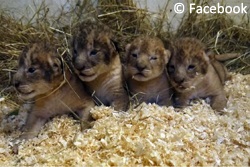 ‘In the case of the lions at Borås Djurpark, the zoo continued to permit them to breed despite the inevitable production of animals ‘surplus’ to the zoo population. Despite all their hype about conservation and education, zoos remain short-sighted and exploitative facilities, apparently unwilling or unable to take full responsibility for the lifetime care of the animals they keep and breed”.

Born Free continues its call on legislators, zoos and zoo associations to improve transparency regarding the management of animals in captivity, and to ensure that healthy animals do not continue to be killed.