Born Free’s Founder Patron, Joanna Lumley OBE and President & CEO, Will Travers OBE, appeal for more to be done to save the endangered giraffe

Along with elephants, rhino, lions, tigers and many more species, giraffe are now officially endangered.

The IUCN* has today moved giraffe (Giraffa camelopardalis), from ‘Least Concern’ to ‘Vulnerable’ on its Red List due to a 36-40% decline in numbers between 1985 and 2015 to just 97,562. Habitat loss and illegal hunting are significant contributors to the crisis.

Will Travers OBE, President and CEO of international wildlife charity, Born Free Foundation, said: “Giraffe now join the list of iconic wild animals threatened as a result of human activities. How many more must be pushed to the brink before we start taking responsibility and investing in our natural heritage for the sake of all wildlife and future generations?”

Giraffe are also a target species for trophy hunters, adding yet another pressure to an already fragile species.

Joanna Lumley, Born Free's Founder Patron, said: “I had the great privilege of safely moving a number of giraffe as part of a Kenyan conservation project some years ago, together with the Kenya Wildlife Service, Will and the Born Free team. To imagine that these gentle giants - tall blondes, as I like to call them - could be eradicated is almost beyond my comprehension.”

Born Free is currently supporting the conservation of the West African or Niger Giraffe. Numbered in the hundreds, this sub-species has been slowly recovering but is by no means secure. For further information click here

*International Union for the Conservation of Nature 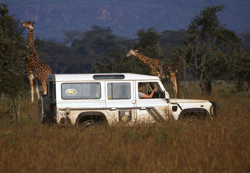