YOU CAN HELP STOP THE DOLPHIN MASSACRE

The brutal slaughter of more than 1,400 white-sided dolphins in the Faroe Islands has triggered huge anger and revulsion around the world, and once again brought global attention to the long and bloody history of whale and dolphin-killing in this beautiful but isolated archipelago 200 miles north-west of Scotland.

I have vivid memories as a young boy of seeing footage of the whale and dolphin hunts, or the ‘grind’, as they are called in the Faroes. Before the age of social media, it was left to a few intrepid filmmakers to bring into our living rooms the wild beauty of the islands and the defiant spirit but violent actions of some of the islanders. In the early 1970s, a short documentary film by National Geographic painted a picture of a uniquely independent people largely untouched by the outside world, in the last remaining outpost of the Viking spirit.

The film included a whale hunt, in which an armada of wooden rowing and powered fishing boats drove a pod of pilot whales towards the shore. The noise and excitement of the people involved was clear as they threw rocks into the water and used their vessels to form a ring around the increasingly alarmed pod of whales. As women and children cheered from the quayside, the whale-hunters plunged their sharp-tipped harpoons into the helpless mammals.

As the sea turned red with blood and the whales twisted in agony, the film’s narrator made a statement that has stayed with me to this day: ‘When the whales come, these peaceful people revert to another age, where killing becomes an outlet for native savagery when Viking blood boils’.

But why, nearly 50 years later, does this barbaric slaughter continue? Although the EU has banned the killing of whales and dolphins by member states, this does not apply to the Faroe Islands as a self-governing country in the Kingdom of Denmark. The Faroe Islands is also not a member of the International Whaling Commission, and whale and dolphin hunts can be legally licensed by the Faroese government.

In recent decades, several marine conservation organisations have engaged with the Faroese government and people to end the whale and dolphin hunts. Public meetings and debates have been held, studies have looked at the economic benefits of developing a whale-watching industry, documentaries have been made and books have been published, yet the brutal killing continues. 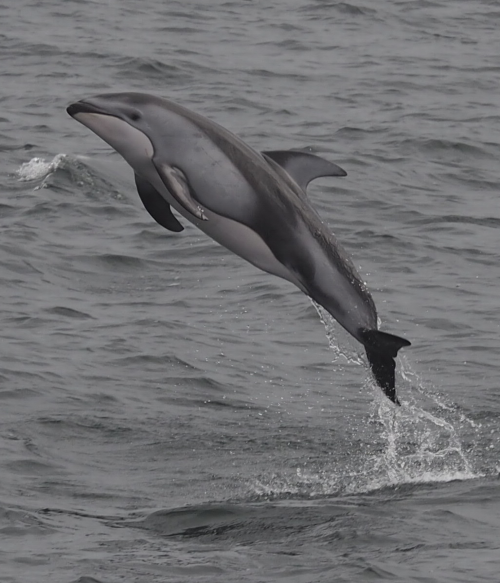 "I have started an online petition calling for the suspension of the free-trade agreement with the Faroe Islands until the slaughter ends for good." – Dominic Dyer

Although the Faroe Islands is an autonomous region of the Kingdom of Denmark, the country could not continue to kill whales and dolphins without the active support of the Danish government, which retains responsibility for defence, policing, justice, currency control and foreign affairs.

Over the past five years, Danish naval vessels, helicopters and military personnel have even been used to monitor and disrupt the activities of Sea Shepherd activists, who record the brutal reality of the whale and dolphin hunts in order to inform a global audience.

However, one key driver for change within this isolated island community, which has been forced to connect with the modern world, is international trade. Prior to leaving the EU, Britain had little leverage over the Faroese or Danish governments on this issue, but that has all changed with Brexit.

In March 2019, the Government entered into a free-trade agreement with Denmark relating to the Faroe Islands, which now accounts for more than 25 per cent of the Faroes’ global trade. In the past 12 months, the value of exports from the Faroe Islands under this agreement was £582million – a 142.5 per cent increase on the previous year. Most of this trade involved cod, shellfish and farmed salmon, which is sold in British supermarkets. In comparison, the total value of UK exports to the Faroe Islands over the same period amounted to £34million.

Since becoming Prime Minister, Boris Johnson has made his opposition to whaling very clear. He raised serious concerns in 2019 with the then Japanese prime minister Shinzo Abe on Japan’s resumption of commercial whaling. In January, he made a stand against the killing of a minke whale by Japanese fisherman, telling The Daily Telegraph: “At a time when we are already seeing the tragic and irreversible destruction of our natural world, with the sea increasingly pumped full of plastics and climate change threatening entire ecosystems, it is more important than ever to take a stand against the cruel practice of whaling.”

The Prime Minister’s wife, Carrie, and his father Stanley have joined me to campaign against whaling outside the Japanese embassy in London. In recent days, Foreign Office minister Zac Goldsmith described the mass slaughter of dolphins in the Faroe Islands as “one of the most sickening spectacles I’ve ever seen”, adding: “It shames our species.”

I have started an online petition calling for the suspension of the free-trade agreement with the Faroe Islands until the slaughter ends for good. If Mr Johnson is not willing to put £34million of British exports on hold to stop this brutal killing of marine mammals 200 miles from our shores, his Government’s commitment to global wildlife protection will be seriously undermined.

No whales or dolphins should be brutally slaughtered in the Faroe Islands to put cod and farmed salmon on our supermarket shelves. It’s time we used trade sanctions to end this barbarism for good.