Last week a Spanish circus agreed to hand over all its animals and end its use of animals. The two lions from the circus have since been rehomed at the AAP Primadomus Foundation, located near Alicante.

This is considered an unprecedented step forward in a country which is believed to have 10 registered circuses with wild animals. The news has been welcomed by Infocircos, a consortium of NGOs, that seeks an end to the use of wild animals in circuses throughout Spain. The Born Free Foundation has been a member of InfoCircos since its inception in 2010.

To date, the work of InfoCircos has successfully secured a ban on the use of wild animals in circuses in the Autonomous Community of Catalonia, with another six regional governments considering a ban, and more than 400 municipalities that no longer allow circuses the use of either public or private land. InfoCircos still has much work to do, but it is important that it remains part of the solution to ending wild animal use in circuses, encouraging and supporting the circus businesses that wish to relinquish their animals and become a show without wild animals.

“There is still a lot of work to be done to ensure Spain joins the 18 other EU countries that prohibit the use of wild animals in circuses,” said Daniel Turner at the Born Free Foundation. “However, the work of InfoCircos continues to go from strength to strength and it is only a matter of time before further regional prohibitions are achieved, finally ensuring Spain becomes a circus (with wild animals) -free zone.” 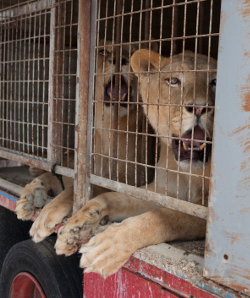