Born Free was dismayed to learn that a licence to hunt a so-called ‘super tusker’ has been granted by Timbavati Private Nature Reserve, which borders the Kruger National Park in South Africa.

Poaching is a serious threat to the future of Africa’s elephants. Tens of thousands of elephants are being slaughtered every year to supply ivory into illegal markets. While South Africa may have been shielded from the worst of the poaching until now, more than 80 elephants have been killed in Kruger National Park since September 2015 suggesting the poaching epidemic is spreading south.

Super tuskers are bull elephants whose tusks are large enough to reach the ground; each of their huge tusks can weigh as much as an average person, and they are prized by poachers and trophy hunters alike. These older bulls are highly reproductively active; bulls between 40 and 55 years of age are considered most likely to sire calves. There may be as few as 20 super tuskers left alive across Africa. Kruger National Park and the surrounding private reserves are one of the last bastions of super tuskers on the Continent.

Born Free’s Associate Director Mark Jones said: “Born Free is opposed to the killing of any animal for sport or pleasure. But selling a licence so a trophy hunter can target a super tusker bull elephant is particularly damaging, at a time when elephants across the African continent are under massive pressure due to poaching for their ivory. There are very few super tuskers left in Africa, and their protection is vital so that their knowledge and their genes can be passed to future elephant populations. This cynical decision is clearly focussed on short-term financial gain, and can only damage the reputation of both Timbavati and South Africa and the future of their remaining elephants. It must be reversed.”

Born Free is encouraging its supporters to sign the petition against the hunting licence, which can be found at https://www.change.org/p/savetheelephants-kenya-stop-the-hunting-of-great-tusker-elephants 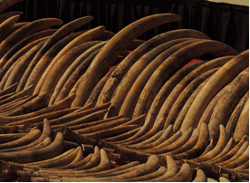