The Born Free Foundation is supporting efforts by South African organisations to persuade the authorities in South Africa to rethink their proposal to permit the annual export of 800 skeletons from captive-bred lions.

The proposal, which was announced at a stakeholder meeting in Pretoria on 18th January 2017, aims to fulfil the requirement for South Africa to establish an annual export quota for skeletal products from captive-bred lions as agreed by the Convention on International Trade in Endangered Species (CITES) at its meeting in October 2016. At that meeting, exports of bones from wild lions was banned, in recognition of the emerging threat the international trade in lion bones poses to beleaguered wild lion populations.

However, the South African authorities did not consult widely and appear to have arrived at the proposed quota under pressure from lion breeders, who are thought to hold as many as 8000 lions on more than 200 intensive breeding farms across the country.

The Department of Environmental Affairs invited comments on the proposal by 2nd February 2017, following pressure from wildlife protection groups.

The joint submission which Born Free is supporting argues that any quota needs to reflect good evidence that the trade will not be detrimental to wild lion populations (a so-called ‘Non-Detriment Finding’). Such evidence is currently lacking, although studies on the impacts of the lion bone trade are planned by both CITES and the South African National Biodiversity Institute. The setting of any quota should await the outcomes of these important studies.

As few as 20,000 wild lions currently occupy just 8% of their historic range across Africa. Increasing international trade in lion body parts, particularly bones which are used as a replacement for tiger bones in medicinal products and tonics in Asia, has been identified as a major threat to lion conservation by the International Union for the Conservation of Nature and lion Range States.

More than 3,000 lion skeletons and skulls were reported to have been exported from South Africa for between 2006-2015, most of which were derived from captive-bred lions. The fear is that this trade fuels demand and provides a means by which bones from illegally-killed wild lions can be laundered into trade, thereby incentivising the poaching of wild lions.

The captive lion-breeding industry is extremely controversial, and the South African government admits it has little or no conservation value. Animals are intensively bred for the sole purpose of generating money, through bogus ‘conservation tourism’ such as cub petting and walking with lions, by supplying lions for the abhorrent ‘canned hunting’ industry, and to generate body parts and products for trade.

Born Free will continue to call for the lion bone trade and the captive lion-breeding industry to be shut down. 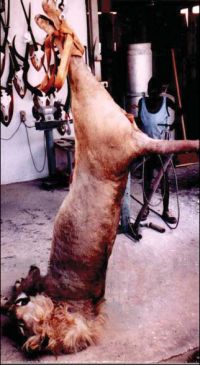