South Africa’s Department of Environmental Affairs (DEA) has almost doubled its controversial annual export quota for skeletons from captive-bred lions from 800 in 2017 to 1,500 in 2018.

In a cynical move clearly designed to placate commercial lion breeders, the announcement was made public on 16th July, just days before the UN Convention on International Trade in Endangered Species (CITES), whose technical committees are meeting in Geneva, is due to discuss the implications of a major report on the impact of lion bone trade on beleaguered wild lion populations.

“South Africa’s decision to almost double its quota for the export of skeletons from captive-bred lions flies in the face of both common-sense, the clear need to protect wild lions, and the precautionary principle. The cruel, profit-driven, intensive lion breeding industry has been encouraged to grow almost exponentially by the South African authorities over recent years, to the point where the government doesn’t even know how many facilities there are or how many lions they house. This industry is out of control, condemns the thousands of animals concerned to a miserable life, and may threaten the future of wild lions across their range.”

Earlier this year Born Free published a report entitled ‘Cash Before Conservation’, exposing the cynical breeding of lions in South Africa for hunting and bone trade. The report highlights the increasing state-sponsored industrialisation of wild animal production in South Africa, and the inherent dangers of prioritising wild animal management practices purely on the basis of their profitability. The world needs to understand the dire consequences that can result when incentivised markets meddle in the consumptive use of wild animals. Raising the lion skeleton quota does not necessarily correlate with meeting the demand or preventing illegal activities and may, in fact, stimulate both.

As few as 20,000 wild lions remain across Africa, and scientists predict further devastating declines in the absence of concerted action. Meanwhile in South Africa, 7,000 or more lions languish in at least 260 intensive breeding facilities, where they are exploited at every stage of their often short lives. Unwitting volunteers pay to hand-rear ‘orphaned’ or rejected cubs that have been torn away from their mothers at just a few days old; tourists cuddle cubs and walk with adolescent lions; adults become breeding machines, or end up being shot by paying trophy hunters in canned hunts, their bones and body parts turned into glue, cake or wine for sale in lucrative markets in Vietnam, Laos or China, often as a substitute for tiger bone.

Conservation scientists and lion range State governments have recognised the international trade in lion bones as an emerging threat to beleaguered wild lions. At its meeting in Johannesburg in 2016, CITES responded by banning international trade in bones, bone pieces, bone products, claws, skeletons, skulls and teeth from wild lions. However, South Africa was permitted to continue exporting lion products from its captive-bred lions, subject to it establishing an annual export quota. 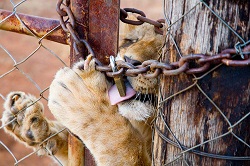 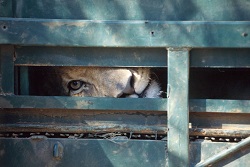 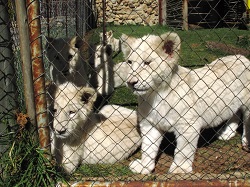 Lion breeders have been losing income recently because of a US moratorium on the import of hunting trophies from captive lions. Press reports suggest that some have been killing their captive lions and stockpiling the skeletons. Pressure on the South African authorities has clearly paid off, with an increase in the quota from 800 in 2017, to 1,500 this year.

The announcement is seen by some conservationists as a pre-emptive strike by the DEA, coming as it does just days before a report on the impacts of lion bone trade is due to be considered by Parties to CITES, which indicates an alarming increase in the targeting of wild lions for their body parts by poachers, who are being offered increasingly large amounts of money for teeth, claws, and carcasses for international trade. Organised criminal groups are thought to be behind the poaching and trafficking. The existence of a legal trade in bones from captive lions risks legitimising the product in the eyes of consumers, increasing demand, confounding enforcement efforts, and giving the poachers and traffickers a means to launder wild lion parts into trade.

Travers continued: “While much of Africa struggles to protect its remaining wild lion populations, the South African government bows to the state-enabled business of lion breeding and the pursuit of profit from wild animals, reducing the most magnificent of predators to mere body parts and commodities, while seemingly blind to the wider potential cost to Africa’s precious and fast-disappearing wildlife.”