Born Free is deeply saddened to learn of the death of Dr Shirley McGreal OBE.

Born and raised in England, Shirley received her doctorate in India, and lived in Thailand, France, and various parts of United States before settling in South Carolina. It was during her time living overseas, that she became aware of the cruel and illegal trade in primates, and dedicated the rest of her life to protecting them.

In 1973, she formed the International Primate Protection League (IPPL). In her role as the leader of this organization for decades, Shirley worked tirelessly at the grassroots level to protect all primates from abuse.

In 1977 she established a gibbon sanctuary at her South Carolina home, where she helped rescue and care for countless monkeys.

A fearless animal campaigner, Shirley fought hard against the trade in all species, but particularly primates, through her involvement in CITES, the Species Survival Network (SSN), International Union for Conservation of Nature (IUCN) and the International Primatological Society. In 2008 she was awarded her OBE for services to the protection of primates. 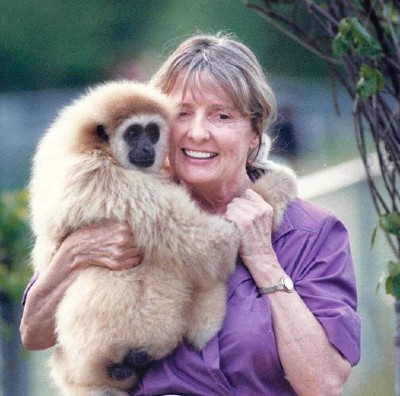 Born Free's Executive President and Co-Founder, Willl Travers OBE said: "Shirley McGreal seemed to have been part of our lives forever.  All the CITES meetings and SSN meetings that she attended, often with Dianne Snow, all blend into one. She was a constant presence - informed, compassionate, experienced and tough. Shirley did not suffer fools but she was the best of friends.

"I had not seen her for a while, but she was never far from my thoughts, and I am sure I speak for all of us when I say that she will be immensely missed. What she achieved for primates - wild and captive - around the world cannot be underestimated and, through IPPL, her legacy continues.

"It was one of my most cherished moments when Shirley approached me at a CITES meeting to say how proud she was of SSN and all that it had achieved - we could not have done it without Shirley.

"Virginia McKenna OBE, Born Free’s Co-Founder, joins me in sending our sincere condolences to all who knew Shirley but, above all, we celebrate the life and achievements of an incredible person."