Supported by British Airways Holidays, and fronted by Born Free’s newest Patron, Mollie King, Raise the Red Flag allows people around the world to not only report their concerns about captive wild animals, but also provides individuals with a voice while acting as Born Free’s eyes and ears on the ground, alerting the charity to potential cases that may require its help.

The system will also help other animal lovers be aware of where not to visit – both in the UK and abroad.

Dr Chris Draper, Head of Animal Welfare & Captivity at Born Free, said: “Captivity can never recreate the complex environment that animals have evolved to encounter in the wild. Countless wild animals are kept in captive situations for human entertainment – in circuses and animals shows, as photo props for tourists, for animal encounters, for film and TV, or as pets. There are tens of thousands of zoos worldwide, holding millions of wild animals in captivity. All these activities can have serious animal welfare implications and pose real risks to both animal and public health and safety. 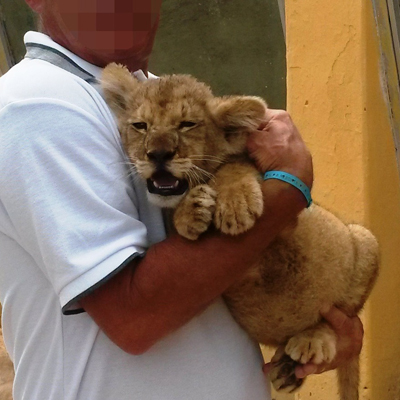 “Many people may have seen a captive wild animal in distress. They may have visited a zoo, a tourist attraction or stumbled across abuse of captive wild animals and felt uncomfortable or concerned about what they witnessed. When people encounter situations like this, they can find it difficult or daunting to speak out, or simply do not know who to contact. Our new Raise the Red Flag system will allow supporters worldwide to report incidents of wild animal suffering, while offering advice on what to look out for and what action to take after reporting their concerns.”

Mollie King added: “I am truly honoured to be joining Born Free as a Patron, the whole team there do such worthwhile work, all with the ultimate goal of keeping wildlife where it belongs; in the wild.

"A few years ago I was fortunate enough to be able to join Born Free in rehoming captive bears from Georgia to a Greek sanctuary. Seeing how badly the bears had been treated before they were rescued - some of them being forced to ‘dance’ on hot stones for tourists - appalled me, the trip also made me realise there is so much work to do to end these horrific activities. I am so pleased Born Free exists and is doing everything it can to end the exploitation of wild animals. I’m excited about lots of things that we have planned for my patronage, in particular the launch of Raise the Red Flag. I want to do all that I can to help Born Free shine a light on the reality of captivity for wild animals and Raise the Red Flag is such an important project for everybody to be able to do that.”

Draper concluded: “Sadly, we can’t help every captive wild animal, but where possible we can investigate, contact the establishments, travel companies or authorities involved, and highlight that suffering to the rest of the world. When people inform us of wild animal suffering through Raise the Red Flag, we will empower them to take action and do everything we can to help as many animals as possible.”