On a particularly windy morning where duom palm trees along the rivers sway low generating a soothing rhythm, we drive 30km deep into Meru Park towards the western boundary.  From here and with boots firmly on the ground - accompanied by Kenya Wildlife Service rangers - the Born Free team skillfully manoeuvres through the thickets while avoiding the direction of wildlife. At a distance, we can hear elephants trumpeting and mother buffalos grunting warning calls to their calves. Our focus is Kiolu, a hotspot for wire snares that are placed from the Park’s boundary to some 3km into the Park.

On average, our team dedicates three to four hours to foot patrol, covering about 2km2 per operation, combing through the thick bushes, shrubs and open grasslands in search of snares placed to trap wildlife.

Today, our mission bears no fruit in terms of removing snares. There are none in the area we have patrolled. We decide to make our way back to where we parked the vehicle. Not too long after, a putrid stench wafts towards us. Soon we come almost face-to-face with a decomposing baboon, its teeth exposed totally freaking us out! We edge closer to the carcass from where a swarm of flies and maggots are making a meal out of it.  It’s gut wrenching! We note a snare firmly attached to a tree and from which the baboon is hanging by the neck. A painful death without doubt, and probably a slow one too. As much as dying is part of nature, it is depressing to see these innocent animals ensnared by poachers who engineer the whole process. For this specific baboon, we couldn’t do much except cut off the snare from the carcass.

Wire snares remain the most used type of poaching along the Park’s western boundary. Fence lines are cut and used for snaring by poachers. This in turn opens up access for wildlife into community farms leading to increased human-wildlife conflict incidences. Snares are set in strategic positions mainly along the animal tracks and near water points. In some instances, pits are dug along the paths and covered with dry grass. All wildlife, big or small, is at risk. Placement of snares is mostly done during the dry season and at the onset of rains. During such seasons, we enhance our operations by pitching mobile tents in the target areas.

Since 2015, we have recovered over 1700 snares, have apprehended four poachers and rescued a number of wildlife including a lion. Kiolu was once a hotspot zone for snares. In May 2015, we recovered 116 live snares in a single operation.

Through collective and concerted effort, and continued outreach awareness missions to the community, the situation is slowly changing. In the last few months, the number of snares removed along the Park’s boundary has drastically reduced.

Every time we see the baboons that live near our living quarters racing through their congresses or bounce playfully from tree to tree or the males chasing competitors with loud ‘wahoo’ calls in long bouts, they are a constant reminder of the voiceless animals wandering in the Park unaware of poacher’s ill intention. We believe our efforts to protect them is paying off and snaring will soon be a thing of the past. 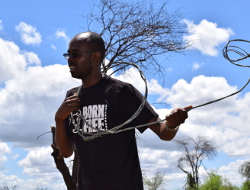 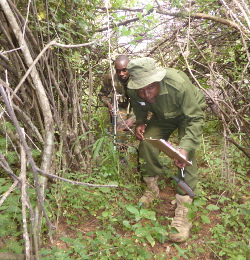