FOUR AND A HALF DECADES OF PROTECTING KAHUZI BIEGA NATIONAL PARK: A RANGER’S STORY

Name: Namegabe Ntamaburhiro Michel
Date of birth: 1950
Status: Married and father of 9 children.
Location: in the village of Mudaka, 7 km from the highland of Kahuzi Biega National Park.

Michel was recruited as a ranger in 1979, nine years after the creation of Kahuzi Biega National Park (KBNP). With his team, Michel made frequent patrols into the highland Tshivanga sector of the park, either leaving park headquarters for daily patrol work or undertaking longer patrols that would last days or even weeks and involve carrying provisions, tents and other equipment for the whole duration.

The image to the right: Michel showing one of his sons the score where the bullet penetrated in his right arm in 1982.

Michel and his team ambushed and arrested plenty of people who were taking part in illegal activities inside the park. These illegal activities included tree cutting, animal trapping, mining, hunting and farming.  People arrested inside the park, often called poachers, were detained at the Tshivanga headquarters where they would stay until they paid a fine, as per Congolese Wildlife Authority rules.

In August 1982, Michel and five other rangers were sent to man the patrol post at Mulume Munene, about six hours walking from Tshivanga. On August 22nd Michel and his co-workers heard poachers hunting game in the park. Michel’s team sought them out. Unfortunately the poachers were armed and during an exchange of fire, Michel was shot in the right arm. Other rangers did their best and with immense courage apprehended two of the poachers. Michel, who was rapidly losing blood, was carried by his friends to the hospital during the night and spent the next six months there recovering. Despite this terrible incident, Michel did not give up his work as an anti-poaching ranger. After a year, he was re-deployed to other patrol posts in both the highland and lowland sectors of the park. Michel always said, when he was interviewed, “I am happy to be a ranger and that I serve to protect the gorillas, it is my passion and I am fearless to succumb one day in the park while fulfilling my noble job”.

Michel and seven of his colleagues received an environmental award  for the protection of KBNP in 2008 and were retired. Michel now stays at home with little to occupy his days but says, “my determination to keep contributing towards the protection of gorillas is endless.Although I have no budget to pay school fees for my children, above all, I know that I should send them to the Pole Pole Foundation’s forestry high school, the Anga-POPOF-Miti school, in order that they become the second generation to protect the park after me”. Michel has sent three of his children to Anga-POPOF-Miti to study. This school also has an environment club which is currently funded by the Born Free Foundation’s Global Friends Programme.

Recently Michel has been voted in as the vice-president of the parents’ board of the school and is dedicated to fulfilling his task. Retired rangers like Michel must still pay for their children to study but this becomes increasingly difficult without an income, despite working hard for almost four decades for such a noble cause.

An important part of protecting World Heritage Sites in Danger, like the Kahuzi Biega National Park, is to invest in younger generations from the surrounding communities. Nabintu Namegabe, Michel’s first daughter achieved the state diploma from the Anga-POPOF forestry school two years ago and she now intends to go to university in order to study for a bachelor degree.

Every year, students from the Anga-POPOF-Miti school sit for the state exam and many of them successfully receive their diploma, some even with 100%. Unfortunately, most of them cannot go on to university as they have no funds for fees, and Nabintu Namegabe is no exception. 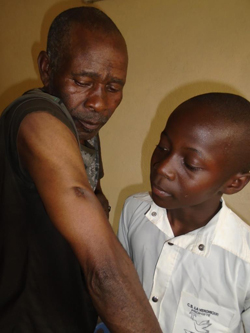