Research published this week in the journal Vaccinereports field trials of the oral vaccine SAG2 in Ethiopian wolves, Africa’s most threatened carnivore and the world’s rarest canid.

The trials, undertaken by the Ethiopian Wolf Conservation Programme, with support from the Born Free Foundation in the Bale Mountains of Ethiopia, are the first ever conducted in wild populations of an endangered carnivore.

Researchers from Ethiopia and the UK tested various ways to deliver the SAG2 vaccine in three wolf packs. Of 21 wolves trapped after vaccinations, 14 were positive for a biomarker indicating that the animal had ingested the bait; of these, half showed antibody titres in blood above the universally recognised threshold, and 86% had levels considered sufficient to provide protective immunity to wildlife. Wolves were closely monitored after the vaccination, and all but one of the wolves vaccinated were alive 14 months later (higher than average survival).

Oral vaccination proved to be the answer to controlling rabies in wild populations of red foxes and northern raccoons in Europe and North America, but the approach has never been tested in wild populations of endangered carnivores such as Ethiopian wolves and African wild dogs, which are at risk of extinction because of outbreaks of infectious diseases.

Lead author Claudio Sillero-Zubiri, Born Free's Head of Conservation, said: ‘We now have a safe vaccine, a suitable bait, an efficient delivery method, and trained monitoring teams in place – all crucial steps which open up the possibility for scaling up the oral vaccination and protecting the wolf populations at risk, before disease strikes again.’ 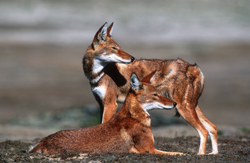