It is with great regret that I report the death in hospital from pneumonia of Professor Ratan Lal Brahmachary, one of India’s leading conservationists, an expert in the study of tiger pheromones, and a Founding Patron of The Born Free Foundation (then called Zoo Check) in the mid 1980’s. He was 86.

Professor Brahmachary corresponded with Bill Travers and Virginia McKenna, our  founders, for over 30 years and met with them on several occasions.

Virginia McKenna recalls: “It was a very sad moment when I learned of Professor Brahmachary’s death.  His life was linked to ours in several unusual ways – as one of Zoo Check’s first Patrons in the 1980’s, and also because of his work with our close friend, George Adamson, in Kenya’s Kora Game Reserve (now Kora National Park).  Two very different, extraordinary men bound by their compassion and concern for wild creatures and their belief that they should never be in captivity.”

Professor Brahmachary was widely-regarded as man of wisdom and understanding. He was deeply concerned about the suffering of wild animals in captivity and was always keen to promote a compassionate conservation agenda which aimed to reconcile the needs of free-living wild tigers and the human communities that lived nearby.

Virginia concluded:  “One thing I recall, as if it was yesterday.  The Professor and I had lunch together at the Chelsea Arts Club, in the heart of London, but our souls were in Africa – sharing our thoughts, feelings and memories.  We, and the animals, have lost a loyal and true friend.” 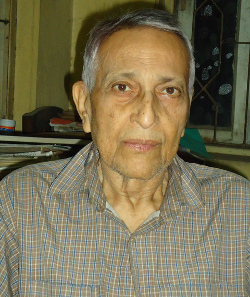