After many years of co-existence, the Maasai community living in Lemasusu area in the Amboseli ecosystem and lions from the neighbouring Chyulu Hills National Park suddenly got on a collision course. Predation on the community’s livestock by lions had increased.

Jeremiah Lemiti’s homestead had particularly been on the receiving end. “I have lived here for over 25 years and had not seen anything like that before. There was no night that we slept peacefully all through for four months. The lions attacked relentlessly and no amount of scaring chased them away,” states Lemiti.

Most of his neighbours had moved to other areas in search of water and pasture, leaving him and two other families. This increased the probability of their traditional thorn-and-bush bomas being attacked by lions.  The powerful cats became more daring, at one point attacking during dusk just after the cattle had been driven home.

Between November 2016 and February 2017, lions attacked nine times killing a lactating cow each time. Consequently, nine calves were orphaned, a huge blow to Lemiti’s family. Worse was yet to come. The remaining lactating cow could not keep up with the demand for milk from some of the orphaned calves and her own, leading to her death.

For Lemiti, the lion attacks cost him physical and mental exhaustion, and serious cultural and economic setbacks.  In his community, livestock is life. It serves as a social utility and is pivotal in the Maasai identity and economy.  Individuals, families and clans establish close ties through giving or exchange of cattle.

In the eyes of the community, Lemiti’s stature was slowly diminishing for three reasons. First, his stock had drastically reduced in numbers. Livestock numbers is used to determine one’s social status in the community and each of his lost cows would have fetched about 30,000 – 40,000 Kenya Shillings (US$300 - 400). Secondly, for those five months, his family’s milk intake decreased as the orphaned calves needed milk for survival. Milk is one of the staple foods for the Maasai. Thirdly, Lemiti had not taken any ‘tough’ action to retaliate against the lions despite spending sleepless nights protecting his cattle at night.

“I heard of the lion-proof bomas from some friends who told me that they are very reliable. I sought the Born Free for advice on how to apply for one. I am very tolerant of wildlife but I had reached my end on losing my only cultural and economic capital,” explains Lemiti.

Today, the predation problem at Lemiti’s home is history. Born Free Foundation stepped in by constructing a 300m predator-proof boma. Lemiti gave his contribution of 25 per cent and, together with two men in his home, was also trained on how to maintain it.

This new predator-proof boma, as with the other 250 dotting the landscape of Amboseli, will protect livestock, and Lemiti’s family can sleep soundly again. The bomas also reduce chances of retaliation on the lions and other predators.

A win-win for all. 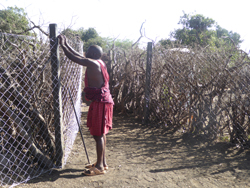 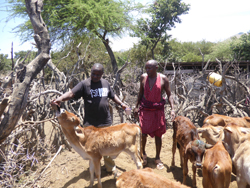