Born Free is disappointed to learn that the Yangtze River Fisheries Administration, China, has ordered the capture of Yangtze finless porpoises from the wild for transfer to dolphinaria for breeding purposes.

It is not known how long the porpoises will remain in captivity but there are concerns about the poor track records of the parks that have been chosen to house the porpoises.

Chimelong Group — one of China’s biggest amusement park operators and owners of one of the dolphinaria — angered many last year when it unveiled plans to spend 5 billion yuan (£580m) on a land reclamation project that would endanger a local population of Chinese white dolphins.

The company’s killer whale breeding centre was also criticised last year by animal welfare groups who remain concerned for the animals, all of which have been wild caught from Russian waters.

Samantha Goddard, Born Free's Captivity Campaigns Officer, said: "This is very sad news. Dolphinaria in China continue to stock their tanks with wild-caught animals and it seems these finless porpoises are their latest ‘asset’. Depleting wild populations to be kept in tanks is not conservation, it’s the very opposite."

Public opposition against the keeping of whales and dolphins in captivity contributed to the recent decision by Thomas Cook to stop selling tickets to SeaWorld, and to SeaWorld ending the captive breeding of their orca. 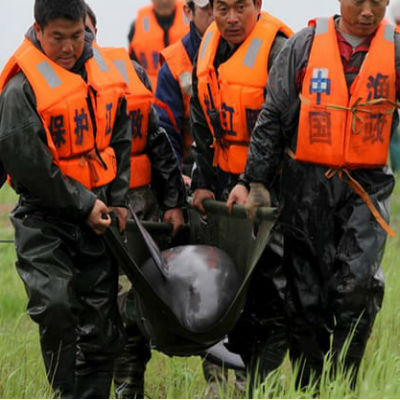