A polar bear has died at SeaWorld San Diego this week. The 21-year-old female, Szenja, had been without her friend Snowflake for two months after Snowflake was shipped to a zoo in Pittsburgh for breeding purposes. Following the separation of the two companions, Szenja’s keepers said she had been showing signs of lethargy and loss of appetite. SeaWorld has said that it could be several weeks before the cause of death is determined, whilst there is even speculation that it was sheer loneliness and boredom that killed Szenja.

Polar bears can often be observed displaying stereotypical behaviour, such as repetitive pacing, when held in captivity. We are convinced that these naturally far-ranging animals simply cannot thrive when kept in a restricted captive environment.

Nonetheless, progress is being made on the issue of animals at SeaWorld. In 2016, SeaWorld agreed to stop breeding its captive orcas (or killer whales) at all of its parks, and in January of 2017, SeaWorld San Diego officially ended the use of its orcas in theatrical style shows. With more people learning the truth about captivity, it has placed a spotlight on the existence of zoos and the keeping of wild animals in captivity. At Born Free, we continue to raise awareness of the plight of captive wild animals. This year we have gone ‘back to our roots’, with a focus on our work to challenge the exploitation of wild animals in captivity, through our #BeyondtheBars campaign 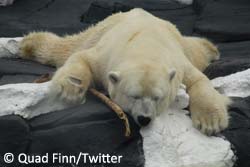