The hunting of pangolins, the world’s most illegally traded mammal, has increased by 150 percent in Central African forests from 1970s to 2014, according to a new study led by the University of Sussex.

The first-ever study of its kind, published in Conservation Letters, shows the true scale of local pangolin exploitation across the continent. The international research team, which includes researchers from academia and conservation organisations, state that up to 2.7 million pangolins are harvested annually from forests in Cameroon, Central African Republic, Equatorial Guinea, Gabon, Democratic Republic of Congo and Republic of Congo.

The team used data from 113 sites in 14 African countries to estimate the total annual harvest of pangolins. Worryingly the new study reveals the mammal, which is more sought after than elephant ivory and reproduces slowly, is now making-up an increasing proportion, of all animals hunted in Central Africa. The researchers found that snares are still being used to capture pangolins despite the practice being illegal in most Central African countries.

Pangolins are hunted and traded for food and traditional medicine throughout their range in Africa, and recent evidence has also shown an increasing trade of African pangolins to some countries in Asia. The researchers show that the price of pangolins has increased in urban markets since the 1990s, with a 5.8 times increase in price observed for the sought after giant pangolin despite it being protected.

The team are calling on governments across the continent to increase the capacity to enforce international trade bans, embark on education and outreach programmes, and monitor pangolin populations.

Daniel Ingram, lead author of the study from the University of Sussex, said: “Our new study shows that African pangolins are at risk. We now have the opportunity to ensure that these species do not follow the severe declines of the Asian pangolins. If we do not act now to better understand and protect these charismatic animals, we may lose them in the future.”

“Compared to other species, relatively little is known about African pangolins, only gaining international attention in recent years. With hunting increasing, it is crucial we investigate how this links to the illegal wildlife trade. The engagement of governments and local people will be critical to the conservation of African pangolins.”

Professor Jörn Scharlemann, from the University of Sussex, said: “Overexploitation is one of the main pressures driving wildlife, like the pangolins, closer to extinction, yet data to evaluate the pressures underlying species’ declines are scarce.

“Collating data from local studies collected by hundreds of researchers allows us to provide vital information on the regional exploitation of African pangolins at a critical time for the survival of these species. Bringing these individual studies together allows us to see the bigger picture that can help inform conservation policy and provide the evidence to governments across the world required to step-up and take action.”

The collaborative study, entitled ‘Assessing wide-scale pangolin exploitation by scaling local data’, has been published in the journal Conservation Letters and can be found here. 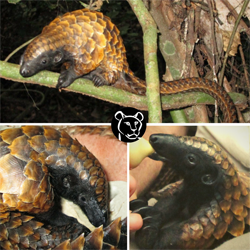