ANOTHER WEEK, ANOTHER TRAGIC DEATH AT A UK ZOO

Born Free Urges Government To Speed Up Measures To Bring To An End The Keeping Of Elephants In Captivity Following Distressing Reports Of An Elephant Killed By Another Elephant At A Zoo Near Bristol.

Born Free is devastated to learn that a male 12-year-old elephant, M’Changa, was apparently attacked and killed as he slept by another male elephant at Noah’s Ark Zoo Farm near Wraxall, North Somerset.

The zoo has launched an investigation and, without naming the elephant that committed the attack, said their other two elephants, Janu and Shaku, were unharmed.  However, Born Free is urging the government to conduct a separate, independent, and transparent investigation into the incident which follows the shooting of two bears at Whipsnade, two waterbuck at Port Lympne, and the whistleblower report revealing a number of animal deaths at Blair Drummond, all within the past month alone.

“News of this tragic event once again highlights just how inappropriate it is to keep elephants in captivity,” said Born Free’s Head of Policy Mark Jones, a veterinarian. “Zoos can never provide suitable environments for these highly intelligent and socially-complex animals. Sadly, these kinds of tragedies are inevitable when animals are forced to live in close proximity in socially inappropriate groups. 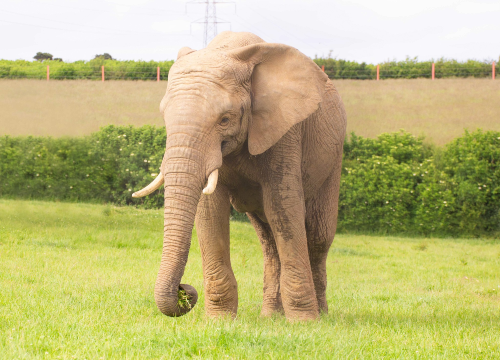 "The outdoor enclosure at Noah’s Ark, reported to be 20 acres, is large for a zoo, but for an elephant it’s a tiny space. The phasing-out of elephants in UK zoos, potential policy news of which broke in recent days, cannot begin soon enough, and we urge the UK government to strengthen its resolve.”

Elephants have a similar lifespan to humans. M’Changa, who was born at Boras Zoo in Sweden in 2008, was the youngest of the three bull elephants, and was transferred to Noah’s Ark in 2014, where he joined Janu, now aged 16, who was born in the UK at Howletts Zoo.

Shaka, the oldest of the bulls at 29, arrived at Noah’s Ark from a zoo in Vienna in 2018, having reportedly never previously been successfully integrated into another group of elephants. Reports indicate he is wild-caught, originating from the Kruger National Park in South Africa, and spent time at zoos in Lisbon and Duisberg before being moved to Vienna in 2016.

“This is truly shocking,” exclaimed Born Free Executive President Will Travers OBE. “In captivity there really is no ‘normal’ elephant behaviour. We are creating elephants that simply do not know how to be elephants, with very poor social experience and skills. This incident raises so many questions that need to be answered. How exactly did the elephant die? Was it gored? Is there any record of aggression? Does the enclosure design allow for an elephant under pressure to escape? Why are they not naming the attacker? We once again urge the government to review the UK’s zoo inspection policy and urgently bring the keeping of elephants in UK zoos to a swift but humane end.”

In response to the incident, Born Free consulted with internationally-renowned elephant expert Dr Joyce Poole, Scientific Director of ElephantVoices, who has spent most of her life studying elephants in the wild in Kenya and beyond. She asks whether the elephants were under constant surveillance and if there is CCTV that might better explain this tragic incident. She speculated whether any of the elephants were in musth (a condition male elephants typically experience for 2-3 months each year when their hormone levels rise, they become sexually active, and will often challenge or exert dominance over other male elephants) and, if so, whether the zoo had taken extra precautions or considered separating the sexually active musth male.

Dr Poole stated “Keeping male elephants together in a small space like 20 acres is asking for trouble - there is nowhere for the others to go if one of them comes into musth. Mixing 12,16 and 29 year old males is unwise. In the wild, males tend to socialise with elephants of similar size and age, though not in permanent groups. Even the gap between 12 and 16 is on the borderline. I would question this age grouping, especially among captive males who have grown up without social role models and have no choice regarding play partners.”

The most recent formal inspection of Noah’s Ark Zoo, as part of its zoo licence requirement, took place in 2016, prior to Shaka’s arrival. The report advised the zoo to provide field shelters for the elephants within three years. However, it seems that, as of 2019, this recommendation had yet to be fulfilled by the zoo. Whether such shelters might have provided M’Changa with the opportunity to escape the attack which ended his life, we will never know.

Will Travers continued: “Ending the exploitation of elephants in zoos is why our charity began in 1984. We have long-reported the detrimental effects captivity has on these intelligent, socially-complex animals. Whilst our sympathies are with the keepers at Noah’s Ark, this tragedy clearly shows that the suffering and psychological distress resulting from captivity can lead to fatal outcomes. Whether one agrees with the keeping of wild animals in captivity or not, surely the public can at least expect those animals to be safe from harm.

“Noah’s Ark Zoo has reportedly stated that it will review ‘the best way forward’ for the elephant programme at the site. It is not in doubt that long-term humane solutions need to be found for the over 50 elephants currently held in captivity in the UK, half of which are males However, traditional zoos are not the answer and it’s high time the Government initiated measures to phase-out of the keeping of elephants in captivity in the UK, with all due regard for the welfare of the remaining animals. Born Free has been considering this situation for many years, have ideas and plans that are well-advanced and stand ready to assist in such a process.”