This year Ngamba Island Chimpanzee Sanctuary, located on Ngamba Island within Lake Victoria, has been tackling the effects of a significant water level rise which has been washing away jetties and threatening infrastructure.

Lake Victoria, located in the south eastern corner of Uganda, is a fantastic 410km long, making it Africa’s largest lake. Given its size, only substantial climatic events can significantly impact the water level. However, in January 2016 it was reported that the water level had increased by over 5m from measurements taken just two years ago, a rise linked to the effects of El Nino – a climate pattern centred on the Pacific Ocean that causes global changes in rainfall and temperature. The rise and fall of water levels in the lake has been well-documented since the late 19th century but such dramatic changes still impact local populations living on the 3,000 islands within the lake, not to mention along the 3,440km of shoreline in mainland Uganda, Kenya and Tanzania.

However, thanks to the amazing work of the Chimpanzee Sanctuary and Wildlife Conservation Trust team the 47 chimpanzees which currently call Ngamba Island home are in good hands and Born Free, through our Sara adoption, has been able to help ensure their safety (see Sara and Nakuu pictured right © CSWCT).

Despite having their hands full maintaining essential flood defenses, the team from Ngamba have still found the time to work with local schools and communities to promote habitat and wildlife conservation for the benefit of all.

Last week we got word that a toilet block at Koome Church of Uganda Primary School, funded through Born Free’s Global Friends Programme, was completed and officially handed over to the school and their local community. This block will help promote better waste management and reduce the pollution of lake Victoria which, in addition to the water level rise, is a key concern for both the people and the wildlife that rely on the lake – a true example of conservation through community development. 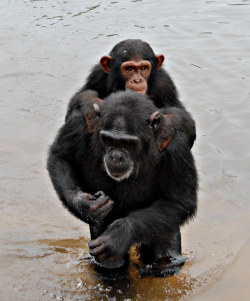