Over the past 5 years, 35,000 or more badgers have been needlessly shot under licence across the west and south west of England, as part of the government’s strategy for reducing bovine TB in cattle.

The vast majority of these poor animals will have been perfectly healthy, and there is precious little evidence that the tiny proportion that that may have been infected with bovine TB posed any real risk to cattle. Yet far from abandoning this unscientific, inhumane, ineffective and unnecessary policy, Natural England is currently considering new licence applications for zones in the counties of Avon, Berkshire, Derbyshire, Hampshire, Oxfordshire, Shropshire, Staffordshire and Warwickshire.

If these licenses are granted and existing licenses renewed, tens of thousands more badgers will be needlessly killed during 2018, and there is a serious risk that badgers could disappear altogether across large parts of England where they have lived since the last ice age.

If you live in these counties, please make your voice heard. You may want to highlight the local disruption that badger culling might cause, including:

Details of the consultation can be found at: https://consult.defra.gov.uk/natural-england/8899f8e7/

Local residents in the counties concerned can respond through an online form at: https://consult.defra.gov.uk/natural-england/8899f8e7/consultation/intro/ 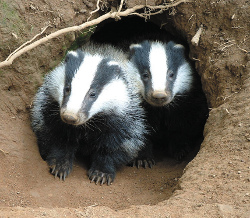