IN SPITE OF OUTRAGE FOLLOWING CECIL’S DEATH, THE SLAUGHTER OF LIONS CONTINUES

Six Years After The Killing Of Cecil The Lion By An American Trophy Hunter, News Has Emerged That Yet Another Lion, Named Mopane, Has Been Slaughtered Outside Zimbabwe’s Hwange National Park In Almost Identical Circumstances. 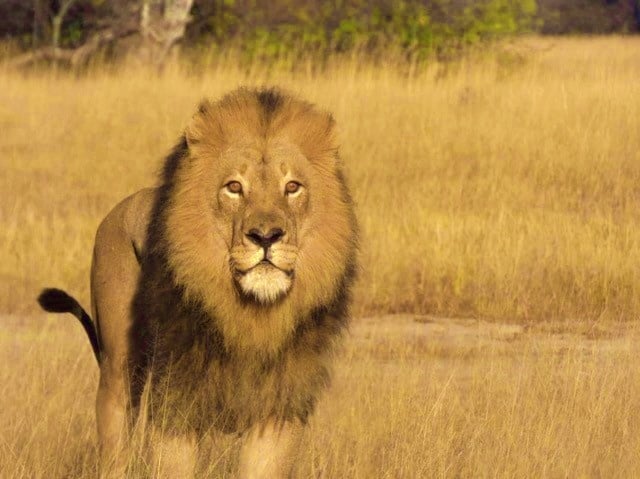 Mopane was a well known 12-year-old male lion, and head of his pride. Reports suggest that, like Cecil, he was lured out of the park using bait before he was killed by a foreign hunter. The likely outcome will be that young inexperienced males will move in to take over the pride, killing any of his cubs they find and causing yet further disruption to the lions in Hwange National Park, and the wider ecosystem of which they are a critical part.

Cecil’s suffering and death made headlines, touched hearts and minds across the world, and led to widespread calls for a ban on trophy hunting. Yet since his death in July 2015, more than 5,000 lion trophies have been shipped internationally, most to the United States and Europe. While the majority of these were from lions bred in factory farms in South Africa for use in so-called ‘canned hunts’, many were also derived from wild lions. Zimbabwe alone reported exports of some 180 lion trophies derived from wild lions over the past six years.

The hunter who killed Mopane is reported to have paid US$30,000 for the ‘privilege’. This sounds like a lot, and hunting proponents will claim it helps fund wildlife protection and provides local communities with essential income. However, the money generated by trophy hunting represents a tiny fraction of the total income generated by other forms of wildlife-related tourism that don’t involve killing animals, and much of the ‘blood money’ paid by hunters never reaches conservation projects or local people.

Born Free ethically opposed the killing of animals for sport or pleasure. We also challenge the claims made by proponents of trophy hunting that it delivers significant conservation or community benefits, or serves as a means of removing old, ‘redundant’ or ‘problem’ animals. Mopane was none of these.

Wildlife is in serious decline. Lion populations across Africa have reduced by around 80% in recent decades, and fewer than 20,000 may now remain. We live in the hope that, over time, countries that currently permit trophy hunting can be persuaded to reject this cruel and damaging activity and seek more effective and humane ways of securing and funding the protection and recovery of lions, and indeed all of our global wildlife heritage. It can be done – Kenya, with support from local communities and NGOs like Born Free, has increased its lion population by around 25% since 2010, and today has some 2,500 lions, without opening its doors to trophy hunters.

By the same token, the UK and other European countries should reflect the overwhelming opinion of their citizens and prohibit the import and export of hunting trophies, while considering how they can help mobilise the resources needed to halt and reverse nature’s decline and secure wild habitats across the world.

Allowing wealthy trophy hunters to kill endangered wild animals for fun is, in our view, no way to ‘manage’ wildlife or generate funds for its protection. We simply have to do better.

Mopane’s death is yet another tragedy for Africa’s lions. If his killing revitalises calls for an end to trophy hunting and a more enlightened approach to wildlife conservation and the enhancement and empowerment of local communities, then hopefully some good can come out of yet another tragedy.

FIND OUT MORE ABOUT TROPHY HUNTING