This year began on a high note for our lion monitoring activity in Meru Park. After two days of intensive lion tracking, we noted several activities along the major roads.

We found the Nairobi Girls pride (top right) - eight individuals - resting under thicket along Kubai Road. They looked healthy, sated and at peace.  A few metres away, two adult maneless males - George and Moja – were enjoying the shade from the blazing heat. George (right middle) is one of the males that we had collared two years ago but the collar became faulty. Despite numerous searches for him with a plan to replace the collar, he proved tough to sight for months as he roams far and wide in the wilderness that abuts the Park. It was great to see him again in good health. However, the collar couldn’t be replaced as the Park’s resident vet had been away on leave. The lion seems to have disappeared into the thick Meru bushland but we are continuing with collaborative searches with the KWS team.

Meanwhile, we spotted Simon, the lion we helped rescue last October, with a female from Mulika pride (see picture). Simon was ousted from his pride - Mulika – by two younger males and suffered life threatening bite wounds and tears. He may have lost his pride but he still has raging fire within him. His wounds are now healed. We hope that in four months, we will be marveled by miniature Simons in the Meru wilderness. 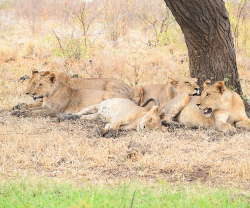