International wildlife charity Born Free has applauded the public crushing of surrendered and confiscated ivory which took place in Melbourne’s CBD last week. The event, to coincide with World Wildlife Day 2018, symbolised the mood of more than four out of five Australians who want to ban all trade in elephant ivory and rhino horn.

At the event, organised by local charity ‘For the Love of Wildlife’ and supported by many, including Born Free, ivory carvings and ornaments were handed in by members of the public, catalogued and summarily put through a rock crusher. Ivory seized by Australian law enforcement agencies was also destroyed as part of the ‘crush.’

Will Travers OBE, Born Free’s President and Co-Founder, said: “Each and every piece of ivory represents a tragic and unnecessary loss for the individual elephants involved, for their family members and for the ecosystems, in which they played a critical role. I have stood beside the bodies of poached elephants and rhino. Masses of stinking, rotting flesh, staining the wild earth. No one needs ivory or rhino horn - the only ones who desire it are those making a killing.”

The Melbourne crush highlighted how much more valuable elephants and rhinos are alive, rather than as mere products for trade, and the role that Australia, its government and its citizens, can play in addressing the plight of these iconic species. Both elephants and rhinos continue to be slaughtered in staggering numbers across Africa and Asia. In South Africa alone, more than 1,000 rhino have been poached every year since 2013, with 144,000 elephants being poached between 2007 and 2014.

The scale of illegal imports of ivory and rhino horn into Australia is not public knowledge but is thought to be significant. Similarly, the extent of trade within the country’s borders remains unassessed, but is believed to be considerable. What has been lacking so far is the political will to join with other conservation-minded governments to ensure a future for these iconic species. The role that domestic trade plays in perpetuating demand for ivory and rhino horn has been widely recognised and acted upon elsewhere: two of the world’s biggest ivory markets, the USA and China, have put in place domestic bans, and the UK and the European Union are considering the same.

In a recent survey, 77% of Australians were unaware that it was legal to sell ivory in Australia, and 86% of those surveyed thought the ivory trade should be banned.

Will Travers concluded: “There is often an assumption that a practice as antiquated and out of step with a progressive society, such as trading in wild animal body parts, has been banned many years ago. Unfortunately this is not the case at all, and I would encourage Australian citizens and indeed the citizens of any country to take a close look at what their legislation currently says, and call for change when change is needed.”

Born Free also recognises that animals are not the only victims of the illegal wildlife trade. More than 1,000 wildlife rangers have been killed in the line of duty in the last 10 years. In turn, most of the frontline poachers are mere pawns of the organised criminal networks that control wildlife trafficking.  When it comes to the bloody illegal wildlife trade there really are no winners. 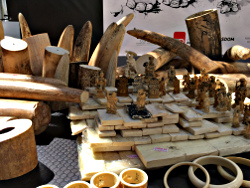