After apparently escaping from a rope tethering her, she was found wandering alone, dehydrated and hungry by a compassionate farmer on the outskirts of Lusaka. ZPP swung into action and earlier this week she was flown to the Luangwa Valley where Anna Tolan from Chipembele Wildlife Education Trust  and one of ZPPs ex-volunteers Ruth were waiting at the airstrip to meet her.

Anna reports that Chipazuwa looks to be in very good health and isn't underweight, though this doesn’t mean she has received the correct nutrition. She is now enjoying apples and other fruit/veg and it is obvious that something like a rope had been tied round her waist.

At first light, the day after her arrival, Anna took Chipazuwa to meet the other orphaned baboons. Mica was first to greet her and gave her a kiss. Pluto jumped into Anna’s arms as she carried Chipazuwa and was fascinated. It has been quite an adventure for this infant baboon, but now she has a bright future, which reflects the name she has been given  – Chipazuwa......which means in local language “sun killer”.....so beautiful she outshines the sun! 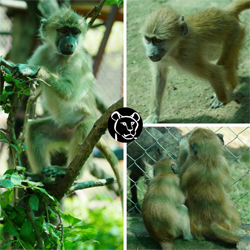