Partners since 2007, Born Free is proud to be able to facilitate continued support for the Lilongwe Wildlife Trust (LWT) in Malawi thanks to Margot Raggett and Remembering Elephants.

In 2014 the Lilongwe Wildlife Centre, run by LWT, had rescued a total 83 wild animals, released 58 of them and had 254 under their long-term care. Some were victims of human-wildlife conflict and many were rescued from the illegal bushmeat or pet trades.  Despite taking in every animal they could, the team were also getting an increasing number of calls about helping wild animals in distress, especially rhinos or elephants in National Parks across the country that were injured by snares set by poachers.

So, in partnership with the Department of National Parks & Wildlife, LWT set up the Wildlife Emergency Response Unit (WERU) to provide nationwide veterinary-related support for wildlife emergencies and conservation projects in the field.  Since its inception, WERU has been run by Dr Amanda Salb, who remains the only wildlife veterinarian in country qualified to carry out wildlife capture.  In the first year alone Amanda and her team responded to 31 callouts.

This year, Remembering Elephants, via the Born Free Foundation, and the Olsen Animal Trust have pledged support for both WERU and the emergency veterinary care for wild animals rescued through the Wildlife Centre.

It is another example of working together to secure the future of Malawi’s wildlife. 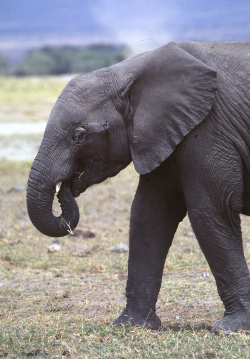