A female Eurasian lynx has escaped from “Borth Wild Animal Kingdom”, a zoo near Aberystwyth.

The wild cat, named Lilith, is about twice the size of a domestic cat and reportedly escaped during the last five days. Local police are asking people to contact them or the zoo directly if the animal is seen. "The lynx is unlikely to approach people, but may attempt to take livestock or pets as food," said a police spokeswoman.

The troubled zoo had only recently been bought by new owners. The Born Free Foundation remains very concerned for the welfare of Lillith. We are convinced that zoos are fundamentally unable to guarantee the safety of all animals and people, and that protocols to prevent and deal with escapes are woefully inadequate. While we hope that Lillith is found safe soon, the relevant authorities must act to urgently review safety in zoos, and in this particular case ensure that the new owners of Borth Wild Animal Kingdom are equipped and experienced to ensure the welfare and safety of the zoo’s animals. 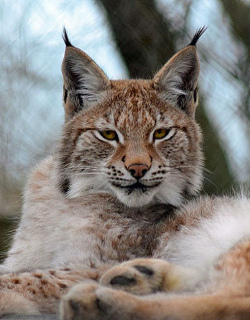