Born Free is saddened by the news that a lioness was shot dead after escaping from an enclosure at Planckendael Zoo in Belgium.

It is not yet clear how the animal escaped, but after four hours without recapture and apparently two failed attempts to anaesthetise her, she was shot dead by police. It was reported that while the lioness was on the loose, around 40 zoo visitors took refuge in the gift shop whilst children arriving at the zoo were told to stay on the school bus.

Planckendael Zoo is a member of the European Association of Zoos and Aquaria (EAZA), which claims to represent “well-managed” zoos and to ensure that “member zoos and aquariums achieve and maintain the highest standards of care”.

Dr Chris Draper, Born Free’s Head of Animal Welfare and Captivity, said: “Yet another tragedy in yet another zoo; the fact is that accidents can, and do, happen in zoos, and animal and human lives are placed at risk as a result. Assurances that certain zoos are well-managed or have high standards seem to mean very little in reality. Zoos everywhere should be subject to much greater independent scrutiny, and to meaningful sanctions when incidents like this occur.”

FIND OUT MORE ABOUT CAPTIVE ANIMALS 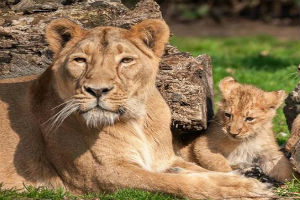