WHY LION TROPHY HUNTING MUST END

Most people know about the terrible declines in many of Africa's animals, particularly elephants.

What many people don't realise is that Lions, arguably the most iconic of Africa's predators, are also in real trouble.

Just a century ago there were perhaps as many as a million lions across Africa. But they have been in steep decline in recent decades. In my lifetime alone Africa's lions have declined from around 100,000, to as few as 20,000 today. That's a shocking decline of 80% or more in just a few short decades, and the remaining animals live in fragmented populations scattered across just 8% of their traditional range.

What is just as shocking is the fact that, in spite of these massive declines, hundreds of lions are killed every year in the name of sport, by wealthy trophy hunters mainly originating from the USA and Western Europe, who pay tens of thousands of dollars for the privilege.

Every year, hundreds of thousands of wild animals from literally hundreds of different species, many of them threatened with extinction, are killed by trophy hunters, so they can share pictures of themselves posing over the animals they have slaughtered, or videos of their hunts, and display their kills in elaborate trophy rooms as if they are something to be proud of.

Lions are particularly highly prized. The trophy hunting industry even dishes out awards to hunters who kill certain types of animals or use particular methods of killing. Safari Club International offers a 'Cats of the World Grand Slam' award for hunters who kill at least four species of wild cats, including lions.

Of course, this has been going on for decades. In the past decade alone around 5,500 lion trophy items were exported to the US, and around 3,500 to EU countries. However the killing of Cecil the lion in Zimbabwe last year by Walter Palmer, a dentist from Minnesota, created outrage and brought this issue to international public attention.

Proponents of trophy hunting claim that the brutal slaughter of these wild animals is sustainable, and that it benefits endangered species like lions by generating money for conservation and providing income for local people in poor countries. They claim they help by removing so-called 'problem' or 'surplus' animals, and they claim that their so-called sport is a traditional activity and that we have no right to impose our western values on African countries.

But none of this is true.

Far from removing 'surplus' or 'problem' animals, trophy hunters prefer to target the biggest, fittest, most impressive animals that play an absolutely key role in their societies.

Trophy hunting generates only a tiny fraction of the money that can be earned from other types of wildlife tourism, such as photographic tourism, and very little of the money that trophy hunters pay in order to make their kills ever filters down to local communities or conservation projects. The vast majority of the money generated goes into the pockets of a few wealthy individuals.

The trophy hunting industry is riddled with corruption, and far from being a 'traditional activity' in Africa, trophy hunting is a relic that was exported to Africa in colonial times.

And trophy hunting causes immense animal suffering, not just among the targeted animals, but also because of the disruption the killing causes to their societies and communities.

In the case of lions, the cruellest, most cynical and greed-driven form of trophy hunting has emerged in South Africa in the form of so-called 'canned hunting', where lions are intensively bred for the bullet, to be released into small enclosures and shot by the paying client.

On 30th April, a number of animal protection charities organised a march for lions through London, culminating in the handing in of a letter to 10 Downing Street asking the British government to take action by banning the import of lion trophies into the UK, and supporting international measures aimed at protecting lions from hunters, wildlife traders and other threats they face.

The UK is far from being the biggest source of lion trophy hunters, or the biggest importer of lion trophies. However, the British government has a real opportunity to take a stand against the brutal, corrupt and damaging trophy hunting industry, and instead promotes compassionate solutions to the problems facing lions and so many other beleaguered species across the world. 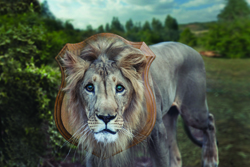