The Born Free Foundation is saddened to learn that a lion has been shot dead at Leipzig Zoo today.

Reports indicate that two male lions, who had recently been transferred from Basel Zoo, had actually escaped from their enclosure this morning. It was during attempts to capture them that one of the lions was shot after efforts to tranquillise him, failed.

Born Free is concerned about the conditions for wild animals at zoos across the European Union. Our investigations (The EU Zoo Inquiry) have revealed that animals and the visiting public are regularly being placed at risk of injury, or worse, due to poorly maintained enclosures. The study has also highlighted an alarming increase in the number of opportunities for people to have direct contact with dangerous animals. Learn more at www.euzooinquiry.eu

The Born Free Foundation has, since being established in 1984, questioned the role of zoos; however our work in the EU, seeks higher standards in animal care and protection, in the hope that such fatal accidents as at Leipzig Zoo can be avoided.

The public is currently invited to comment on the status and performance of zoos in a European survey that considers the regulation and role of zoos. Your input is welcomed 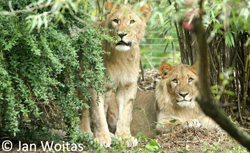